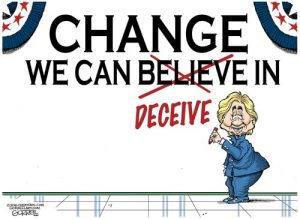 The mainstream media (MSM) and the Democrat Party would like you to think it is the Republicans in full panic mode, but it is their party that’s freaking out. The first tip comes from the MSM that is “going to war against Trump” and acting like the true political hacks they are.  Journalism is dead at the MSM, and they are willing to destroy their businesses to stop the outsider.  Negative stories trashing Trump are not having an effect as Trump is packing rallies by the thousands while voter turnout for Clinton rallies is lackluster.  Meanwhile, major negative stories about Hillary Clinton are being ignored to try to combat her negative image as a liar.  Hillary even lies about what the FBI called lies about her private servers, and the MSM ignores developments such as the IRS opening an investigation into the Clinton Foundation.

The President says the economy is great, but recent statistics say otherwise. GDP, Durable Goods and Manufacturing are a few of the recent numbers that all showed a plunge.  This is yet another reason the Clinton Campaign and the DNC are panicking.  The economy sucks and they know it.  They do not have a good economy to campaign with, and there is no hope of turning things around before the November Presidential election.

Foreign policy is another area that Hillary Clinton cannot tout any success. Libya is a mess, and the U.S. has resumed bombing there.  This time because ISIS is threatening to take control.  Syria is a mess, and there is no end in sight to conflict there, and the so-called “Russian Reset” is building up so much tension that Russia is constantly warning of war.  On top of that, it was just disclosed the Obama Administration gave the Iranians $400 million in cash.  Republicans charge it was a ransom payment to get our four American Hostages back.  The President says the deal has been in the works, and the timing is a coincidence.  Obama says the Iran nuke deal has been a huge success since it was signed, but only one thing is wrong with that statement.  The Kerry State Department has admitted no documents were ever signed by Iran to Congressman Mike Pompeo last year.

Economist John Williams of ShadowStats.com will be the next guest in the “Early Sunday Release.”