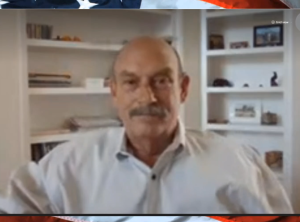 A few months back, precious metals expert and financial writer Bill Holter predicted the economy was going to tank, and today, the U.S. is officially in a recession.  Holter says it’s not just America buckling under enormous debt, but the entire world.  Holter explains, “This is only the start.  They are trying to debate whether or not we are in a recession, but it’s pretty much a lock.  Yes, we are in a recession.  And this is not just the U.S.  This is a global problem. . . . Let me put his into perspective.  If you add up all the global GDP’s, we are roughly $100 trillion.  The problem is there is well over $350 trillion in debt worldwide. . . . When I graduated college . . . anything above 100% debt to GDP was considered a banana republic.  Look where we are today.  Globally, it’s 350% debt to GDP.  What that tells me is the world is a banana republic.”

So, it’s no surprise big money is getting out of fiat currencies like the U.S. dollar.  Less than a month ago, Holter, who is also a precious metals broker for Miles Franklin, brokered what looks like the biggest U.S. silver coin deal in history.  Just the Silver Eagle portion of the deal was 650,000 coins, which was only part of the $50 million deal.  Only $27 million of that could be bought in U.S. incremented silver coins.  (The rest was used to buy gold U.S. coins.)  Holter says that cleared out the wholesale market for U.S. silver coins, including so-called junk silver.  Holter contends, “That shows you how thin it really is.  By the way, a fair portion, 15% or so, was future deliveries from the mint.  So, we basically cleaned up the next four to eight weeks of Silver Eagle deliveries.  They belong to us, and we are still waiting for delivery from the mint. . . . The client wanted U.S. coin.  In the U.S., that is the best form of silver ownership.  We did not touch bars, generics or foreign sovereigns.  So, there is still much more out there to be bought, but how much?   I think $1 billion would buy all the available silver in the U.S.  Think about it.  A billion dollars today is not even the mustard on a ham sandwich. . . . Make no mistake, this deal was a big hit to the inventory . . . of U.S. silver coins. . . . This paper Ponzi scheme is going to come down, and the best place to hide is gold and silver.”

On housing, Holter says it has topped and predicts, “Now, there are no bids, and homeowners are lowering the price.  It was a virtuous cycle to the upside.  Now, it’s reversed, and it will be a virtuous cycle to hell on the downside.  I say hell because there is so much debt outstanding, it will create margin calls across the board.”

Holter is still predicting a Mad Max apocalyptic future that looks more and more like a real possibility.  Holter says, “We have had free and carefree times for the last 40 years.  Now, you are going to see the reverse.  Debt is a two-edge sword, and after 40 years, we are going to see the dangerous side of the sword. . . . There is going to be starvation.  This is going to be unlike anything . . . anyone has even written about from a fictional basis. . . . I’ll be surprised if we make it through this year with the real economy functioning as it is right now.   Supply chains will break down . . . We will have some dire markets leading to . . . market closures and bank closures.”

There is much more in the 44 min interview.

Join Greg Hunter as he goes One-on-One with financial writer and precious metals expert Bill Holter of JSMineset.com for 7.26.22.

Holter adds, the derivative market will take down the central banks because it is thousands of times larger than all central bank capital combined.  “When the system goes down, it will go down fast, and it will be uncontrollable,” predicts Holter.

If you are interested in buying the “Compendium Volume #4,” it’s at the top of the JSMineset.com home page.