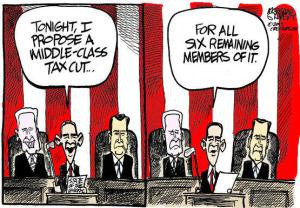 Several top stories are all coming out of the Middle East, and they all show war is approaching.  Yemen has fallen into the hands of Islamic radicals, and there is total chaos and anarchy in the country which now has no formal government.  This is an ominous development as it borders Saudi Arabia where staunch U.S. ally, King Abdullah, just died.  A successor has been named, and he faces a country on its Southern border overrun with rebels that oppose America and its allies.  President Obama has called Yemen a success story, and now it is a disaster that can and will further destabilize the Middle East.  My question is when will the anti-American rebels try to overthrow Saudi Arabia?  That is coming.  The U.S. can’t let that happen because if they do, it’s lights out for the petro-dollar.  The U.S. has been moving men and machinery to the region to fight ISIS.  Will they be diverted to Saudi Arabia?

Israel attacked positions in Syria and killed the son of a Hezbollah leader and an Iranian General.  Iran and Hezbollah say they are going to invade northern Israel in a counterattack.  The Israelis say an attack on Israel was already in the planning stages, and it attacked preemptively.  This could get ugly and very bloody.  Hezbollah has been amassing thousands of missiles, and they could rain down so many missiles on Israel it could swamp the Iron Dome missile defense system.  A missile attack by Hezbollah could make what Hamas did in the south look tame.  This might ratchet up the violence as Israel moves to stop such an attack.

Meanwhile, Iran just signed a defense pact with Russia that could send sophisticated S-300 missiles to Iran.  These missiles are defensive and might thwart a possible air strike from Israel over Iran’s nuclear program.  Here’s a big question, if Israel attacks Iran, will Russia feel obligated to then attack Israel?  Who knows, but this news clearly shows tensions on the rise and peace is being pushed further out of the picture.  A direct attack on Iran by Israel would surely cause a wider way.  On top of that, Israel has released satellite photographs that it says shows Iran has what appears to be a new ballistic missile.  The Israelis claim it is capable of hitting targets far beyond the Middle East.

Closer to home, Congress has invited Prime Minister of Israel Benjamin Netanyahu to address a joint session of Congress.  The White House was bypassed, and now the Obama Administration says it will not meet with Netanyahu while he is in town.  The official reason is that the Prime Minister is too close to his election, and the White House does not want to appear to be showing favoritism to a candidate or a party.  Others say President Obama is furious the White House was bypassed.  Speaker John Boehner has voiced his displeasure over how the talks have dragged on with Iran over its nuclear program and says “hell no” to Obama signing a bad deal.  President Obama threatened to veto any legislation that intensifies sanctions on Iran.  My prediction is the House will have bipartisan legislation for more sanctions and so will the Senate.  There may be enough Democrats that will vote to override a veto.  This is what I predicted after the mid-term elections, and this is what is happening.  More and more Democrats will vote against the President as time goes on.

On the financial front, the European Central Bank (ECB) started its own “open-ended” money printing, or QE program.  It will be spending $70 billion a month buying bonds, but the ECB says it is only picking up 20% of the tab.  It wants other central banks to pick up the other 80%.  I don’t think any other banks can afford it, and Germany certainly will not be chipping in 20%.  I don’t see how it will work.  The euro has been sinking in value, and the U.S. dollar has been rising.  At least two USAWatchdog guests predicted the dollar would rise, and that may indeed force the Fed to start another round of money printing to knock down the dollar.  U.S. companies, which get much of their revenue from sales abroad, are hurting because of the spiking dollar.  The Fed will not let that happen, so expect more money printing to devalue the dollar.

There are also plenty of signs that say the economy is not in a so-called “recovery” but a downward spiral.  This is another excuse to start another round of money printing to prop up the economy a little longer.  Oil and energy companies have been laying off workers by the tens of thousands.  Other parts of the economy are also announcing they are shedding jobs such as eBay, American Express, plenty of retailers and even big banks like Bank of America.  The President touted that the economy was strong, but out here in the real world, it looks weak and getting weaker.

Finally, Ferguson police officer Darren Wilson has been exonerated by the U.S. Justice Department.  This means the entire “hands up, don’t shoot” movement was based on a gigantic lie.  White police officers are not hunting down unarmed black men and executing them.  More than 5,000 blacks a year are murdered by other blacks in America, and those lives don’t seem to matter to people like Al Sharpton.  Much of the city of Ferguson, Missouri, was burned to the ground based on hype and lies. That is a tragedy for the business owners, most of them minority owned, who suffered because their town was being used as a political piñata.