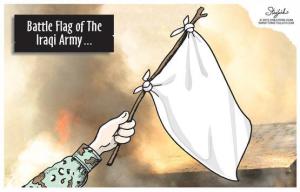 There are three hot spots in the world where war could break out.  Tensions continue to be high in the Ukraine crisis.  The U.S. is continually beefing up supplies and help to Eastern Europe.  There are military drills happening on land and in the air with NATO.  Likewise, the same type of drills are happening with Russian military.  Iraq is a mess with gains being made by ISIS and counter attacks by the Iraqi military and Shia militia.  Secretary of Defense Ash Carter said the Iraqis outnumber ISIS but “lack the will to fight.”  Military sources said, this past week, that Iraqi forces were “not driven out” of Ramadi, but they just “drove out” of that town on their own.  Now, a new offensive is taking shape to take back Ramadi.   President Obama is not planning on sending troops but will train and fly support missions.  The support bombing missions are sparse and some say are a joke.  We see how well the Obama Administration strategy has worked so far.  It’s a disaster.

The big future war probability, that isn’t getting much coverage, is China.  The South China Sea is supposed to be international waters, but China is now claiming a large chunk of it.  That country is building islands, lighthouses and future military bases on them.  The Chinese themselves say these Islands are for military purposes.  They are building bases with long runways, and this is a way for China to project power.  It should worry anyone with a brain.    The Chinese claim the US is causing “provocations and instigations.”  The Pentagon says it will keep sending ships and surveillance aircraft into the South China Sea.  Can a military conflict be far off?

President Obama’s immigration policy that would allow 5 million illegal immigrants to stay in America and receive benefits took another body blow.  A Federal appeals court upheld the blocking of Obamas immigration amnesty that was ruled unconstitutional by a federal judge earlier this year.   This is a pie in the face for Mr. “pen and phone.”  This ruling is going to be very hard to overturn in the next appeal, but who knows what the President will continue to do on his own.

Goldman Sachs is warning the world is drowning in debt.  It is outright warning of another financial calamity that could be caused by a “liquidity crisis” and “ballooning debt.”  Multiple countries around the world have debt to GDP ratios near or more than 100%.  The USA is just over 100%.   History shows that when countries have more debt than GDP, bad things happen to the economy–like it can implode.  I thought we had a “recovery”?  The fact is we don’t have a recovery, and banks like Goldman Sachs don’t want to lose credibility, so they are putting out warnings.  Gregory Mannarino thinks this is a real warning, and Goldman does not want to miss the next meltdown and take a big hit to their waning credibility.  There are plenty of catalysts to cause a crash, and one is a Greek debt default.  The time is running out for the Greek game, and there may be a conclusion as soon as the Greeks are running out of ways to borrow money to pay debts.  The other is a war that goes regional or global, and the three top hot spots are Russia, China and the Middle East.  Big wars in any of those places could touch off a financial calamity worse than 2008.  It’s worse because the debt in the world is much greater.  As I always say, “We have been told that debt (Federal Reserve Note) is money and debt (bonds) is an asset.  We are going to find out neither is true.  Debt is always a liability.”  The world is chocked full of liabilities.