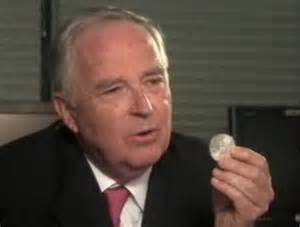 Billionaire retail magnate Hugo Salinas Price says the world debt has peaked and has no place to go but down. Salinas Price explains, “It is a global phenomenon, yes. The world has too much debt, and now it’s trying to get out of debt. That’s what’s going on. . . . The debt peaked in August of 2014. I’ve been watching this for 20 years, and I have never seen anything like it. It was always growing, and now something has changed. A big change of this sort is an enormous event. I think it portends a new trend, and that trend will be to get out of debt. Deleverage and pay down debt. That is, of course, a contraction. Contraction means depression. The world is going into a depression. It’s going to get very nasty. The end result is nations, governments are going to have to revalue gold because that is the only thing they will have left. They will have to resort to that to keep trade coming in. No country is completely independent economically. We all need things others produce. . . . In order to have that world trade going, we are going to have to go back to gold. That’s my vision anyway.”

Salinas Price also says, “We are now in the contraction phase. When I call a debt on somebody, that party is going to call in the debts to him . . . and there is a cycle going on where everybody is going to try to collect from everybody else. So, it reinforces itself. When we come to the end of this contraction phase, we’re going to find a world where there is no other recourse but to revalue gold so that it makes debts payable. It makes money much smaller and less weight.   Then we will have a lot of gold money that has gone up in value. Some people say (gold will be repriced to) $8,000 per ounce. Some people say it will be $10,000 per ounce, and others are going as far as $50,000 per ounce. I don’t know what the value of gold will be, but it will have the effect of diminishing the weight of debt on the world. I don’t know when this will take place, but I think that is coming, and it has to come. That will be the outcome of this century of inflation we have had. I think we are approaching a revaluation of gold.”

Another big component of gold revaluation is a global default in debt. Salinas Price contends, “When everyone has defaulted, then where do we go from there? The only thing will be to revalue gold. There is 183,000 tons of gold, at least, in the world. Some people think there is a lot more that 183,000 tons in the world. When gold is revalued officially, all gold is revalued. It’s not just the gold in central bank reserves. The gold on your finger, your wedding ring, becomes a lot more because gold has been revalued. This will give people the wherewithal to start over again. . . . Silver will go up with gold. Silver will also be revalued.”