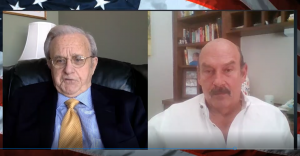 Renowned gold and financial expert Jim Sinclair and financial writer Bill Holter are sounding the alarm now on global financial markets starting to burn down and implode. Sinclair and Holter are business partners at the popular financial website JSMineset.com. Sinclair explains, “‘When’ is the question we are asked constantly by our viewers and readers. . . . ‘When’ is a period of time all of this comes to fruition, meaning the date. . . .‘When’ is now. . . . This is the beginning of something few expect. This has very little to no precedent in history. . . . The system has been unwinding for a significant amount of time, but now is a point in time it is being recognized, especially by those enormous centers of wealth that have robbed so much from so many who are long fiat currency and must convert into something that is real. . . . If you are bankrupt, the way to fix it is to face it–and we are. We have not faced it, but rather made it worse. . . . The price of gold has to equal the liabilities. . . . If we don’t have gold, then it is whatever the price China and Russia wish it to be. If we do have gold, the mathematics work out to be slightly under $20,000 an ounce. I don’t believe we have the gold.”

Holter adds, “The $20,000 per ounce number would be just the debt foreigners hold. If you used the total (federal) debt of $21 trillion, the number is $87,000 per ounce. If you add the number of ‘missing money’ (from HUD and DOD) that Catherine Austin Fitts and Professor Mark Skidmore came up with of another $21 trillion ‘missing,’ you double that gold price. So, you are at $174,000 per ounce.”

Sinclair also points out, “Is there any question why central banks are so interested in using methods of bullying and creating a false market by using counterfeit gold when you realize how difficult the situation actually is?”

Holter says, “Equity markets are levitated. Interest rates have been dropped to zero. Gold and silver have been suppressed. The reason being is the markets have to support the MOPE (Management Of Perspective Economics). In other words, they have to be able to point to markets and say, see, everything is okay. Just look at the markets.”

Sinclair says, “It’s a product of a psychological operation, if you will.”

Sinclair also says, “It’s going to be a Friday to Monday event. There is going to be an explosion, and the explosion is a change. It may blow your mind, but the explosion would not be three or four months or a year in upticks in these items (gold and silver prices). Oh, they are going to uptick. That’s for sure. The finality of this is going to be the reset. . . .It is going to be something entirely new that doesn’t exist now. It may be engineered and not happening by natural causes. . . .You need to know who President Trump is, what he is a master of and what tools he has used effectively as part of his business. It’s not “The Art of the Deal,” it’s the science of bankruptcy.”

How bad is it going to get? Holter sums it all up when he says, “The world is Venezuela.”

Join Greg Hunter as he goes One-on-One with Jim Sinclair and Bill Holter of JSMineset.com in an in-depth exclusive interview.