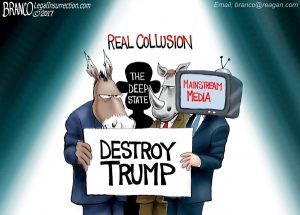 The Senate and House have just passed a veto-proof bill that will increase Russian sanctions. The Russians vow to retaliate, but that is not the big story.  This new sanctions bill looks to curtail the power of Donald Trump to lift these sanctions and take away any and all discretion when it comes to Russian sanctions.  Is this going to turn into a Constitutional crisis and a “Separation of Powers” fight between the White House and Congress?

Will President Trump get rid of Attorney General Jeff Sessions? Trump is still upset that Sessions took himself out of the fight when he recused himself from the so-called Russian collusion investigation.  Now, Special Prosecutor Robert Mueller is hiring Trump hating Democrats and is far from investigating Russian collusion.  Mueller is turning the investigation to Trump and is going back 10 years when Trump was a private citizen.  There is huge conflict of interest with Mueller, and no one at the Justice Department has the power or the will to put the brakes on what Trump calls a “witch hunt.”

Even though the stock market has been hitting one all-time high after another, it does not mean everyone thinks the economy is healthy. Many top money managers are increasing their warnings that something is seriously wrong, and the stock and bond markets could be in for a very big fall.

The guest for the “Early Sunday Release” is money manager and analyst Michael Pento. He thinks fall of 2017 is going to be a very dangerous time for investors.  Hear his five reason why.