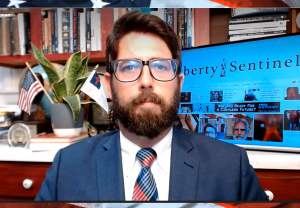 Award winning journalist Alex Newman says the big problems in America are all caused by the Deep State.  Newman wrote a popular book called “Deep State.”  In it, Newman identified the players, tactics and plans that they are executing today in the United States and the rest of the world.  Neman explains, “I think this is what we are witnessing right now.  We are seeing the controlled demolition of American power, of American prestige, economic might, military might and credibility.  We are also seeing the implosion of cohesion in the United States.  You can see division, riots, hatred, and it’s all for the purpose of ushering in this new system.  Part of the reason they are working on this so quickly is they are deathly afraid of the United States at this point because of what happened in 2016.  They thought they had plenty of election fraud to get their minion Hillary Clinton elected.  Boom–it blew up in their face.  They said, oh my goodness, if the American people retake control of their government, we are all going to jail.  They had to accelerate this process, and I think that is what we are looking at, and there is massive amounts of evidence that support this.”

Newman says there is still time to stop, or at least put off, what is happening to the United States.  Newman thinks, “If Americans can regain control of our government through the electoral process, a lot of things can change.  Some things are already baked into the cake.  They have absolutely undermined the U.S. dollar.  They are trying to blame it on Russia and Ukraine.  Gas prices are so high because of Russia and Ukraine—baloney.  They have been printing trillions of dollars and blowing up the money supply.  They have been destroying the supply chains deliberately.  So, it’s inevitable we are going to be dealing with very serious economic pain.”

On the other hand, Newman says, “It is not inevitable that the United States collapses as the world’s sole superpower.  If we could regain control of our government, prosecute the criminals and send a serious message that anybody that tries that again is going to be dealt with.  We need to get rid of the tyranny.  Get rid of the bureaucracy.  Get rid of the unconstitutional laws.  We saw how quickly Donald Trump turned this around after 8 years of the Obama Administration.  After 8 years of Obama, this country was in disastrous shape, yet in a period of two to three years, things turned around.  The markets were rallying, the dollar was strong and the energy was flowing.  In fact, we became a net exporter of energy since the first time since the 1950’s.  It can be turned around again.”

Newman also talks about how the Democrat Party may disappear.  Newman says, “Democrats are traitors and so are the RINO’s helping them.”

Newman also talks about the implications on the 2022 and 2024 elections from the CV19 injections.  Democrats took the jabs at a much higher rate than Republican and Independent voters.

In closing, Newman says, “The big wild card is God.  He is still on the throne.  He is sovereign, and if he decides to intervene, anything is possible.”

Newman wrote his book “Deep State” so you know who the enemy is and anticipate what he will do to destroy your life and your country.

Join Greg Hunter of USAWatchdog.com as he goes One-on-One with award winning journalist Alex Newman, founder of LibertySentinel.org and author of the recent popular book “Deep State.” (04.02.22)  (There is much more in the 46 min. video interview.)

Newman also has his own website called LibertySentinel.org. There is lots of free information and articles there.  Newman is a prolific writer and content creator.