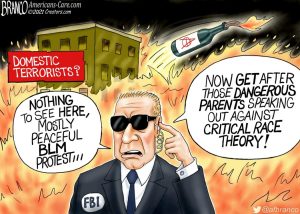 If you want to see that the Deep State globalists are losing the narrative and control, look no further than the news of the DOJ under AG Merrick Garland.  He is sending the FBI to go after parents as domestic terrorists for the crime of protesting Critical Race Theory (CRT) being taught to their children.  Who cares it CRT is hateful and racism that is labeled with some academic sounding name.  It’s not academic, but pure junk science and leftie propaganda infecting our schools and children.  Clif High says it’s “absurd and a desperate attempt to regain the narrative, but it’s not going to work.”

Mitch McConnell has given the Democrats an out and bought them a window of time to figure out a way to explode the Federal debt by trillions of dollars.  McConnell and 10 other Republicans joined with the Democrats to raise the debt ceiling $480 billion  That will get keep the federal lights on and bills paid until early December.  Is the debt ceiling game more dangerous than ever?  You bet it is, and the U.S. dollar and Treasury debt credit rating may suffer from the gaming of our huge debt.

Been to the grocery store lately?  Then you know everything is costing more.  So much for the Federal Reserve saying inflation is transitory.  Market experts are saying it’s permanent or at least sticking around for many years to come.  Why is inflation back with a vengeance?  There are many reasons, and I’ll name a few.  It might be a good idea to stock up –on everything!!

Join Greg Hunter of USAWatchdog.com as he talks about these stories and more in the Weekly News Wrap-Up (10.08.21).

Biblical geopolitical and economic analyst Bo Polny from Gold2020Forecast.com will be the guest for the Saturday Night Post.  He will talk about what’s coming between now and the end of the year and look into 2022 and forecast what’s coming there too.