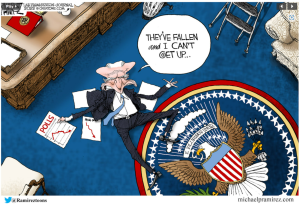 The Democrats are trying to push a new bill, and openly push the idea of gun confiscation.  This bill was originally pushed more than a year ago as an “assault weapons ban.”  It’s now being revived, but why now?  Even after three reaffirming decisions by the Supreme Court on the 2nd Amendment, the Democrats are not only pushing more gun control, but confiscation of firearms.  What is going on for them to be pushing this losing hand at this time.  It sounds like they are desperate to stay in control even if the entire financial system comes crashing down as many are predicting.

Rand Paul tried to reaffirm the power of Congress, and only Congress has the right to declare war.  That was shot down in the Senate before it even got off the ground this week.  So, can NATO declare war for America?  Apparently, it can, and that is certainly the direction our feckless leaders are taking us in when it comes to Russia and Ukraine.  Heaven help us all if it goes nuclear.

It’s another week, and there are more “unexpected deaths” of young people for no apparent reason.  Maybe it’s the bioweapon they have passed off as a vaccine.  It clearly does not work well as a vaccine because, just this week, cheated-in President Joe Biden announced he had Covid.  He also announced he had cancer, but the White house quickly walked that back.

The economy is in turmoil and going down everywhere.  In China, tanks are stopping bank runs.  In Italy, former head of the ECB and now former president Mario Draghi has resigned because the economy is foundering under globalist mismanagement.  In America, BlackRock hedge fund lost a record $1.7 trillion in the first six months of 2022.  Housing is tanking, office space is less than half full as unemployment spikes.  Everywhere you look you have third world economic woes because of insolvency.

Join Greg Hunter od USAWatchdog.com as he talks about these stories and more in the Weekly News Wrap-Up for 7.22.22.

(Correction) Bill Holter will be on next Tuesday 7/26/22 not Saturday 7/23/22.  Steve Kirsch will be on to talk about his transition into journalism after being a top Tech CEO.  Kirsch is exposing Covid lies and the MSM and Deep State Globalist Democrats are not happy.