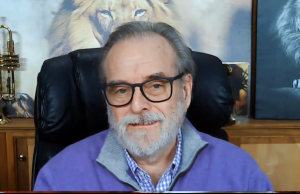 Filmmaker, book author and renowned radio host Steve Quayle says America is in a fight for its life.  Quayle is out with a new documentary called “Megadrought: The Annihilation of the Human Race Accelerates.”  Quayle lays it out and says, “Ladies and gentlemen, you are watching the takedown and takeover of everything that the United States used to stand for, especially in the military.  We are seeing bio-weapons coming out of labs.  There is going to be a release of Small Pox or Ebola, and you just need to follow the patents and follow the patent holders, especially if they own a biologically modified form of Ebola.  Nothing is going to freak people out more than people bleeding out and dying on the street. . . . The bottom line is the globalists, the elitists, the Luciferians, the Satanists, the demon infested cockroaches in Washington, D.C., both sides of the aisle, they want global war because they want the population brought down to 500 million. . . . You can see this in the infamous Deagel Report and on the Georgia Guide Stones.  I think people need to understand we are seeing the total push for global population reduction.  The war that needs to happen, and I am talking about a war that is over in weeks and not years, is in the heart and plans of Satan himself.  This is like three-dimensional chess, and you are watching all the players being moved into position.”

Quayle contends that the satanic globalists want to “starve America into submission.”  Quayle says this is what the weather warfare is all about and points out, “Weather wars are real.  Dane Wigington has done a magnificent job of showing people this over the years on Geoengineeringwatch.org. . . . Now, we are seeing it in real time.  We are watching it where places in the world get an entire year’s worth of rainfall in one day or an entire winter’s worth of snow in one day.  ‘He who controls the weather controls the world.’”

The so-called “vaccines” are not working, and even Dr. Tony Fauci says are they “wearing off.”   That does not stop people from getting yet another injection even though they know they are not working when the public was promised two shots would mean you were “fully vaccinated.”  Not anymore!!  Now, Dr. Fauci says another booster shot is “essential.”

Quayle says it’s difficult to wake up because people believe the propaganda and shun facts and data.  In closing, Quayle warns, “They believe the lie, and watch how many people die. . . . Why does pure science have nothing to do with the conversation, and bovine excrement science, which is no science at all . . . why do they get the public mic?  More importantly, why do the people believe it?”

Join Greg Hunter as he talks to radio host, filmmaker and top selling author Steve Quayle as he talks about his upcoming film “Megadrought: The Annihilation of the Human Race Accelerates.” 11/20/21  (There is much more in the 47 minute interview.)

To see the trailer for “Megadrought: The Annihilation of the Human Race Accelerates,” click here.