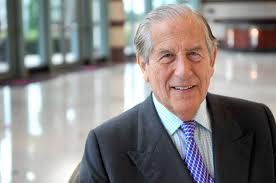 Former advisor to UK Prime Minister Margaret Thatcher and economist John Browne says, “I think it is very near a bottom for gold before it will resume its cyclical upturn, and it will track the irresponsibility of the central banks printing cash from nowhere.”  How will central banks stop the money printing orgy?  Browne contends, “The four most influential central banks in the world are hooked on QE, and I wonder how they’ll ever get out of it because when they even talk vaguely, they may just taper off and the stock market takes a dive.  People are worried.”  Another big worry is war in the Middle East.  Browne says, “Israel cannot allow these sophisticated missiles in striking range of Israeli air fields and their aircraft.  They are very dangerous missiles and very accurate.  Israel simply can’t allow that.  So, the situation is worsening by the day.”  Browne goes on to say, “Commotion in the Middle East, which involves outside major powers, would be very bad for world security and, of course, have a major impact on oil and, therefore, on gold.  Gold is insurance against catastrophe, and a major blow-up in the Middle East would tend towards catastrophe because nuclear powers are involved.”  Join Greg Hunter as he goes One-on-One with John Browne, Senior Economist at Euro Pacific Capital and author of “Hidden Account of the Romanovs”.