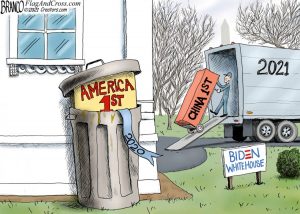 Both establishment Democrats and RINO Republicans are wanting Trump voters, and this includes many Democrats, to publicly say that Joe Biden won the 2020 Election legitimately, even though the evidence and numbers say otherwise. Why? Is it because the Fraud is so big it will never go away. Is it because the Deep State wants the Biden Administration to be seen as legitimate, even though many think the government is, in fact, illegitimate. Is it because the fraud is so big that Trump will have to be returned to office one way or another? Who knows, but many strange things are going on in our nation’s capitol that we have never seen before. We live in interesting times. That is the only thing you can say for sure.

The Democrats and some Republicans voted to try to impeach President Trump for a second time, and this charge is more bogus than the last. They say his claims about the massive election fraud that happened nationwide with the 2020 Election are false. So far, not a single court, including the U.S. Supreme Court, has heard any evidence. This is a stunning fact, even though more than 40 cases have been filed and rejected. This includes four cases on hold at the U.S. Supreme Court. Again, they have been rejected without hearing one bit of evidence. With the Impeachment in the House and trial in the Senate, President Donald Trump will finally have his day in court. Trump will be able to show evidence of massive voter and election fraud. This impeachment will backfire. Let’s hope the American people will finally see the evidence that their vote and their country have been stolen by the Deep State.

Another 847,000 people filed for unemployment benefits this week. It is a stunning number, and with the Biden Administration, that number is not going to shrink but continue to grow. The economy is sick, and it will be getting sicker with policies of Joe Biden and his puppet masters.

Gold and financial expert Alasdair Macleod will be giving his predictions and analysis for what is going on now and coming up in 2021.