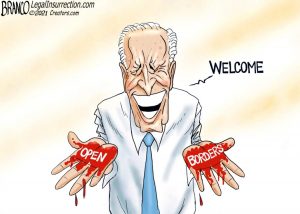 Another week and more election fraud is uncovered.  Now, 400,000 absentee ballots are “missing” in Georgia.  Joe Biden won the state by a little less than 12,000 votes.  The ballots are required by law to be kept, but now they are gone and no way to check them.  There was more election fraud discovered in New Jersey and Mississippi as well, but the public is being told election fraud in the 2020 Election is a “myth.”  That’s a huge lie, and everybody knows it, including the Republicans that worked so hard to put Joe Biden in office.  Now, the Republican leaders are talking about “voter integrity.”  Hey, I thought voter fraud was a “myth”????

Dr. Simone Gold was arrested by nearly two dozen heavily armed FBI agents.  Dr. Gold was at the U.S. Capital January 6th with a bullhorn warning anybody that would listen about the dangers of taking “experimental” Covid 19 (CV19) vaccines.  Yes, you heard correctly, the vaccines are only approved for “emergency use.”  This means the CV19 vaccines are experimental.  Vaccine companies have no idea what will happen long term, but short term, Dr. Gold says they can cause miscarriages and also cause young women to be sterile.  Dr. Gold did walk through the Capitol building on Jan 6th but caused zero damage and did nothing violent.  Dr. Gold thinks the FBI raided her home and broke down her front door to intimidate her and anyone else that would tell the truth about CV19 vaccines and non-vaccine treatments such as hydroxychloroquine, zinc, and Ivermectin that have proven very good results for fighting CV19.  Medical tyranny is here and alive and well in America.

This week, it was reported that another nearly 750,000 people filed for first time unemployment benefits.  How can the economy be getting better?  It’s not.  Yet, the Senate is debating a $1.9 trillion so-called stimulus package.  Will it help the economy?  It might if 91% of the $1.9 trillion was not going to political payoffs and non-CV19 related spending.  All of the money printing out of thin air might be the reason Fed Head Jay Powell is warning about inflation.  Don’t worry, he says, it will be “temporary.”  Hope so because things like grain, lumber, oil and many other commodities are spiking in price.

Market and metals expert David Morgan of The Morgan Report will be the guest for the Saturday Night Post.  Morgan warns the huge spike in the money supply should be a warning to everyone.  He will explain on Saturday.