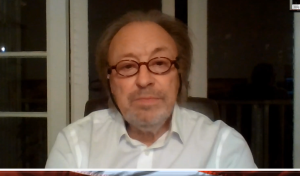 Renowned geopolitical and financial cycle expert Charles Nenner says his analysis shows there is big trouble coming for the U.S. dollar.  The dollar’s reserve currency status is on its way to being a thing of the past.  Nenner explains, “The dollar is still up.  We have a target on the dollar of 113 (on the USDX).  It’s now around 110, but it’s not going to be surviving as the major currency.  People don’t trust what is going on in the United States. . . . We have seen this happen to other countries.  We saw this happen to the British.   They are going to go to another major currency.  The BRIC countries and China are preparing to have an anti-dollar.  I have told you for years that the dollar is not going to crash, but now it is time.  In a year or so, they will really be getting into trouble with the dollar.  If the dollar goes down, of course, the inflation goes even higher.  So, actually, there is no way out anymore.  Every Federal Reserve President has said let’s keep it going.  The dollar is going to collapse, but not in my lifetime, and now there is almost nothing left to do anymore. . . . If you forgive the student loans, you will have a big problem.  First of all, it’s impossible.  They pretend nothing will come out of it, but it will destroy the economy.  When they get out of college, students make 4 or 5 times what other people earn, and it is being paid by the simple people.  You are going to have more social unrest than you have ever seen.”

Nenner predicted in May that a “Third of the global population will be killed in next war cycle.”   The only good news is that it has been pushed back a little and will not start at the beginning of 2023.  Nenner says, “We are going to continue on this pace for war, and it is going to explode in the second half of 2023.”

Nenner says you have seen the lows in interest rates, and the long-term trend is up.  Nenner has been out of the bond market for close to a year.

Nenner has never been more bullish on gold and silver.  He says because of the massive money printing, there will be massive inflation.  Nenner says, “This happened to the Dutch economy.  It happened to the British Empire.  That’s how it goes.  At the end they always print money, and they don’t deserve it.  It’s hard to say, but this usually ends in a war. . . . You have to buy gold and silver. . . . Gold will be up strong up until 2027, but you have to have a strong stomach to take the ups and downs.”

There is much more in the 42 min. interview.

You can also sign up to be a subscriber for Nenner’s cutting edge cycle work with a free trial period by clicking here.    Please mention you heard about this on USAWatchdog.com.

(USAW does not share in Nenner’s revenue in any way.  We do this as a courtesy.)