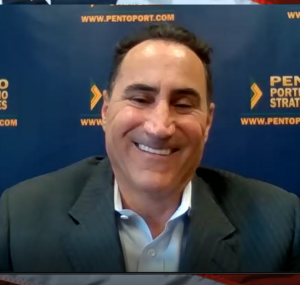 Money manager Michael Pento has long warned the global financial system was “not sustainable or viable” because of record debt creation. Pento has also long said, “This was the biggest debt bubble in history, and it is going to pop someday.” That day has arrived. Now, Pento says, “This is a global depression just like we had in the 1930’s combined with a 2008 style credit crisis. That’s what it is. I was on your program about three months ago, and I predicted a global recession. That was wrong. It is a global depression. . . . We have learned that the S&P 500 earnings will decrease by 10% in the second quarter. We also know that GDP (Gross Domestic Product) for the second quarter is projected to decline by 35%. . . . We also know, according to the St. Louis Federal Reserve President James Bullard, that the unemployment rate in the United States could surge to 42%. . . . April is going to be a disaster. We are not in a recession, we are in a depression, and it is global in nature.”

Pento also cautions, “So, what do you have left for the month of April? The lockdown is going to continue, and then you are facing a plethora of earnings warnings and economic data that is going to be absolutely horrific. . . . I think the stock market has to go lower for the month of April, and then I think we start to find our legs probably in the summer. . . .We have to get through this lock down, and the news is going to be the likes of which none of us have ever seen before–bad, horrific, rancid . . . It will be the worst economic data ever reported. . . . You are going to see GDP plunge at a 35% annualized rate. That has never happened before.”

As bad as this sounds, Pento says it’s going to get worse, “We are not headed into it–it’s here. This is it, a global depression the likes of which we have never seen before, but this is not the real crash. We are going to come out of this, but we are going to come out of this the wrong way, by borrowing and printing money. . . . But that is not the real crash. The real crash is when you have an inflationary implosion of the bond market, and there is not a darn thing central banks can do about it because you can’t bail out inflation by increasing the rate of inflation. . . . After the inflationary implosion of the bond market . . . . and they realize they are destroying the economy because of inflation, they will throw in the towel, and then there will be bail-ins and resets. We are going to default on the debt two ways. First, through inflation, and that’s going to fail. Then, we are going to deflate and rest.”

Pento also predicts, that in the end, the bond market will collapse, “Yields will rise, bond prices will crash.”

Pento thinks physical gold and silver are some of the “must have” assets. He has also recently doubled his investment in precious metals.