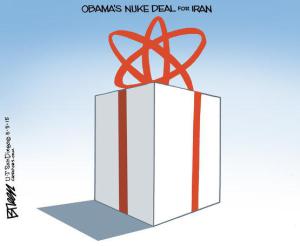 Clearly, the biggest story of the week was the speech Israeli Prime Minister Benjamin Netanyahu gave to a joint session of Congress.  Netanyahu’s speech can be summed up with this Associated Press headline that reads “Israeli leader: Nuclear pact a bad deal.”  Now I know why President Obama did not want him to talk to Congress.  Netanyahu had one standing ovation after another from both sides of the aisle.  Sure, about 50 Democrats did not show up and even criticized the Prime Minister after the speech, but that really made the Democrats look even more disheveled and weak.  There is so much propaganda and disinformation surrounding this deal to curtail Iran’s nuclear program it is hard to get a handle on what is happening.  According to international inspectors, the Iranians are hiding nuclear facilities and are not being totally honest about what they have.  On the Israeli side, Netanyahu himself was accused by his own intelligence agency of over-hyping the progress Iran made in getting a nuclear bomb back in 2012.  Fast forward to today, and there are still plenty of countries who are nervous of Iran’s nuclear ambitions.  Secretary of State John Kerry is in the Middle East trying to sell this deal to our Arab allies.  You know things are bad when Arabs and Israelis team up against a common threat, and in this case it is Iran.

Meanwhile, Iran and its forces are taking the lead in attacking Tikrit, an ISIS strong hold in Iraq.  Saudi Arabia has accused the Obama Administration of effectively giving Iraq to Iran.  John Kerry is also on record this week about using military force to remove the Assad regime in Syria.  Wait, the Iranians are attacking ISIS in Iraq, and the Iranians are supporting Assad in Syria.  Meanwhile, the so-called “moderate Rebels” are in the middle between the two.  Talk about a convoluted mess, you cannot make this up.

It is also reported that Saudi Arabia is in talks with Pakistan that some say is to buy off-the-shelf nuclear weapons.  This is not the first time we have heard the Saudis in talks to buy nuclear weapons from Pakistan.  Published reports said that the Saudis had “ordered” nuclear weapons from Pakistan as far back as 2013.  One can only suspect the Saudis have nukes and might be adding to their arsenal and a counter to Iran.  All I can say is that selling a nuclear deal to Iran, the Arabs and Israel is going to be a very tough sell.  Both the Saudis and Israelis have implied many times they would go to war to stop Iran’s nuclear program.

Obama Care could be in trouble after oral arguments this week in the Supreme Court.  The health care law is being challenged on the fact the IRS is giving subsidies to everybody in America when it was only supposed to give subsidies to states that set up exchanges.  Around 35 states did not set up exchanges.  This could kill the law because it would make enforcement of it impossible in states that did not set up exchanges.  So far, two lower federal courts have ruled that the IRS could not expand Obama Care to cover all 50 states.  Stopping Obama Care, which I think is the biggest concocted policy lie in U.S. history, could be the way to give the biggest boost to the economy and poor working people.  They could get 40 hours a week and snag overtime if it came available.  The decision from the Supreme Court comes this summer.

Hillary Clinton is in big trouble over her use of private email while she was Secretary of State.  It’s reported she had her own account and did official government business from her own account instead of using government accounts that are required to be saved and accounted for by law.  Ironically, Clinton told her staff at the State Department to be sure not to use private emails for security reasons.  This comes on the heels of news of foreign donations given to the Clinton Foundation while she was Secretary of State.  Then, there is also news of Bill Clinton hanging around with a convicted pedophile.  At some point, when does a potential 2016 presidential candidate have too much baggage?  The Democrats are having a hard enough time getting people to get onboard with their socialist message.  Are the Dems going to dump Hillary?  We will see.