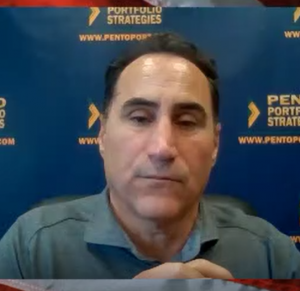 Money manager and economist Michael Pento says the Federal Reserve has only massive money printing left to try to save the economy from the current and ongoing debt implosion. There is going to be lots of fresh cash needed. Pento runs down a list of just few of the things the Fed will need to spend money on and says, “We all should know more than 22 million people have lost their jobs in the last four weeks alone. That’s 22 million people, and the unemployment rate, according to me, is heading up to 15% to 17%. That, my friends, is a depression. We also have the Philly Fed (Manufacturing Index rating) come out with a -56.6. That’s a minus 56.6. That’s the worst ever. Empire State Manufacturing -78.2, which is the worst rating ever. Retail sales plunged in March 8.7%. That is also the worst reading ever. That’s the worst plunge ever, and that’s just March. In my opinion, it will be something worse in April because all of the month will be completely shut down. That’s 90% to 95% of the economy.”

Now you know why the Fed freaked out and started printing money at the highest pace ever. Pento predicts the Fed, who took $4.5 trillion onto its balance sheet as a result of the “Great Recession,” will explode “The Federal Reserve’s balance sheet to $10 trillion by end of the year.”

Pento says forget the so-called “V shaped recovery” because “you cannot simply turn back on the economy like a light switch. There’s no electricity.” On top of that, Pento points out that, “Millions of people who have been thrown out of work have taken on even more debt . . . . So, the economy is not bouncing back.”

So, it is clear the Fed is going to print trillions of dollars in fresh cash to pay for bailouts, unemployment checks and debt payments to avoid massive defaults in the U.S. economy. Pento asks, “What kind of faith will people have in the purchasing power of their fiat currencies? . . . If the Fed can print trillions of dollars with no consequences . . . why bother working? Everybody can just stay home and cash a check. . . . This is a recipe for hyper-inflation. It’s been tried many, many times in history, and it has never worked. . . . The gap between the real economy, asset prices and debt and the underlying economy has never been greater. . . . You have a massive increase of insolvent debt . . . . Then you are going to ad inflation to that mix? Think about the carnage that is to come. That is the real crash. . . . We will partially recover from this virus. . . . We are now sending money, helicopter money, directly to consumers, and that will cause inflation.”

Pento predicts a “tsunami of inflation” is coming in the not-too-distant future. Pento says, “People are losing faith in fiat currencies. The price of gold in other currencies is already at all-time record highs. Even in dollar terms it’s $1,700 per ounce and on its way to record highs. What is the government going to do when you have insolvency and inflationary implosion of the bond market? The real crash is coming. . . . A government cannot issue more debt to bail out an insolvent condition—fact. A government cannot print more money to placate a market that is afraid of inflation—fact. That’s what they are going to be faced with: Yields spiking because of inflation and insolvency concerns, and then there is nothing a government can do. It’s not going to be just the United States, it’s going to be the case globally. . . . That’s when the money is no good, and the bonds are no good.”

Join Greg Hunter of USAWatchdog.com as he goes One-on-One with money manager and economist Michael Pento.