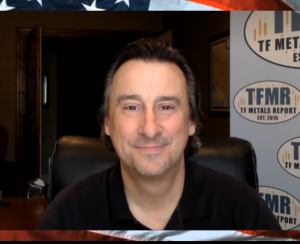 Financial writer, market analyst and precious metals expert Craig Hemke predicted last year (about this time) that silver was headed way up.  It was up more than 45% for 2020 and was one of the best performing assets of the year.  Now, Hemke is predicting “another 45% rise for silver” and a nice ride up for gold, too.  Hemke explains, “Look at all of the commodities here.  Lumber is up five times.  Iron ore is at new all-time highs.  Soybeans are at new multi-decade highs.  Corn, which goes into everything . . . and all these commodities are taking off, which is, in large part, a dollar debasement story. . . . The idea that ‘inflation is transitory’ is bogus. . . . We just got news that McDonald’s and Amazon are raising their minimum wage to attract workers.  That’s just more dollars being pushed out.  You have more dollars pushed out chasing a finite or decreasing amount of goods because of the supply chain problems around the world.  This is a double edged sword and why inflation is not ‘transitory.’  This is why rates are going to stay higher, and that’s why these negative real rates are going to get even deeper.  The markets are going to figure this out, and the prices of precious metals are going to surge in the back half of the year–again.”

Hemke says the Fed is stuck and is fearful of rising rates with massive U.S. debt.  Hemke contends, “The Fed cannot allow the bond market to sell off because that would translate to higher interest rates.  We are already at $30 trillion in a federal budget deficit . . . and they are averaging 1.5%.  So, they are paying $450 billion in interest alone.  If that goes to 3%, they are paying $900 billion.  If that goes to 4.5%, they are paying $1.3 trillion.  The whole budget deficit has already exploded, and there is no turning back. . . .  You saw the CPI at 4.25 %.  Who in their right mind is going to buy a Treasury note at 1.65%?  They will guarantee themselves a loss of purchasing power of 2.5%. . . . The Fed is promising that the inflation rate is going to come down, and it will be ‘transitory.’  I say it’s not ‘transitory.’  We have $3 trillion in deficit spending this year already, and it’s only going to get worse.  We are on the path of Modern Monetary Theory (MMT), and the Treasury issues the bonds and the Fed just buys the bonds. . . . This creates a very favorable environment for owning physical gold and physical silver even with the phony baloney pricing scheme of futures contracts.”

Above all, owning physical anything is protection from inflation that is already here.  Hemke says, “We talk about owning physical precious metals for protection against all this madness. . . .They are constantly debasing the dollar, and I don’t want to save in dollars anymore.  I’d rather save in an actual physical asset. . . . Even if it does nothing, this still beats an asset that is being inflated . . . . All these pieces are coming together again, and it’s pretty clear we’re going to have a heck of a summer and a heck of a rest of the year.  I said silver is going to $36 or $38 per ounce this year, and from $26.50 is going to be 50 some odd percent.  We are going to get there.”

Join Greg Hunter of USAWatchdog.com as he goes One-on-One with Craig Hemke, founder of the popular website TFMetalsReport.com.

There is other free information on TFMetalsReport.com.

If you want to subscribe, use the promo code “Hunter” and get your first month half off.  (This offer is for monthly subscriptions only.)

This segment is sponsored by Discount Gold and Silver Trading . Ask for Melody Cedarstrom, the owner, at 1-800-375-4188.