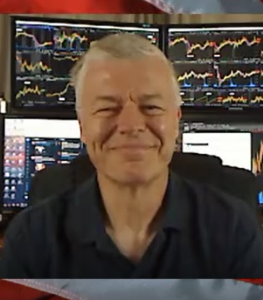 Analyst and entrepreneur Karl Denninger says the economy is good for some people but not so good for others. Denninger explains, “I think it is very good for people in the top couple of percent.  I think it is moderately okay for people in the top 10%. It is terrible for people that are further down the line.  The real problem is not that it is good or bad for any particular group, but it is the entire thing is running on borrowed funds.  In other words, the days of you going and working and you saving your economic surplus, that’s gone.  You don’t have an economic surplus.  If you look at the statistics and they say the majority of Americans cannot come up with $400 for an emergency, please tell me how we can have a great economy if the majority of people cannot fix a transmission if it blew up in their car tomorrow.”

So, why are big money managers and investors like Ray Dalio and Mark Mobius telling people to buy precious metals?  Do they see the economy hitting the wall? Denninger says, “Everyone sees the wall. Everyone sees the problem.  The monthly Treasury statements are public.  Go pull it up on a computer. . . . It is the general ledger of the federal government, and it’s terrible.  The thing is everyone knows it is terrible, and it has been terrible for a long time.  It was terrible when Obama was President, and it is terrible now.”

Denninger contends that there is so much debt and leverage in the world that the whole economy could turn dramatically worse without much warning.  He also thinks we would not just face a financial calamity as in 2008, but possibly extreme social unrest given the partisan political environment. Denninger says, “You need to be looking at what sort of exposure do you have if everything goes down the toilet.  Also, we don’t just have an economic calamity, but we have a civil order calamity because the people on the Left want that. . . . We have two candidates running for President, and thank goodness that they are both polling at 1% so they have zero chance of winning, but they say they will start a civil war, and they are willing to kill 15 million Americans, murder them, if they don’t get their way on guns.  I don’t know if anybody understands how dangerous that statement is. . . . That’s a civil war. That’s what is going on in Yemen right now. . . . Look what just happened in Saudi Arabia.  They had 10 drones, and they blew up some stuff.  How hard would it be for somebody dedicated to do something like that in this country and cripple some of our cities?  How long would civil order persist if that happened to, let’s say, Chicago, and the official estimate is it will be two or three months before the power comes back on?  I don’t want to see this, but you have politicians that are making noises who are going to try to impose this sort of stuff. . . . If you are dependent on the medical field or you have debt and a job and you can’t make it for three to six months without them, you’ve got a problem and you need to do something about it.” 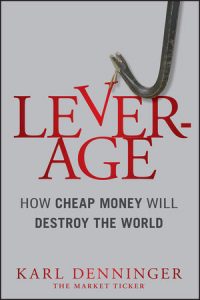 A few years ago, Denninger wrote a popular book called “Leverage: How Cheap Money Would Destroy the World.” To get a copy of his book, click here.  It looks like much of what he predicted in “Leverage” is coming true.   There is lots of free information and analysis on Karl Denninger’s website Market-Ticker.org