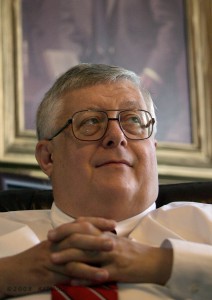 Renowned economist John Williams says forget the happy talk about the so-called “recovery”—it ain’t happening.  Williams contends, “I wish I could say things are booming, but indeed they are not. . . . The GDP in the last three quarters, if you believe what they put out, is the strongest economic growth seen in more than a decade.  That’s not the common experience. . . . The consumer is in terrible liquidity straights. . . . The reality is the economy has not recovered.”

Williams goes on to say, “In the fourth quarter in November and December, the traditional holiday season was the worst Christmas shopping season since the economic collapse in 2008.  January (2015) is off to an even worse start.  It looks like the first quarter is going to contract before and after adjusted for inflation, and that is very bad news. . . . You got retail sales, industrial production that’s going to be weak, and the housing sales numbers have never recovered . . . Any measure you look at is still well below coming into the recession, and again that’s tied to the consumer’s liquidity.”

So, why does America seem to be doing much better than the rest of the world?  Williams explains, “What’s been at work here is the perception that the U.S. economy is recovering, and the Fed doesn’t need to provide any more quantitative easing (money printing).  The dollar has strengthened, and as you see, our major trading partners moved towards quantitative easing because of the recessions they have.  Well, guess what?  We have the same problems as our trading partners.  We are still in recession.  They just do the numbers a little more honestly.  We’re not done with quantitate easing. . .   As it becomes clear that the U.S. economy is still in recession, or a renewed recession, the speculation will come back that the Fed has to renew its quantitative easing or expand it . . . that will hit the dollar very hard.  As the dollar sells off, you are going to find oil prices spiking a new, inflation spiking a new and eventually the rest of the world will dump the dollar.”

Williams goes on to say, “The underlying fundamentals for the dollar just could not be worse.  Fiscal conditions have not improved.  Deficit numbers last year were small according to headline numbers, but if you look at it with generally accepted accounting principles, it was still about $6 trillion . . . per year.”

Williams called for the beginning of hyperinflation sometime in 2014 but has now revised that prediction to 2015.  Williams says you will know hyperinflation is starting by watching the dollar.  Williams says, “The first stage of it will be a reversal of the dollar.  We are not going to have hyperinflation until you see a massive decline of the dollar.  That will start the process.  You will see the flight from the dollar, and the Fed is going to have to absorb them.  That will be the trigger for the money supply growth within the system which will exacerbate the inflationary problem and the deficit problem and the funding problems.”

Williams says the Fed has given a false sense of security but did not fix the problems that led to the last meltdown.  Williams warns, “People say everything is fine again—nonsense.  You had a panic in 2008. . . . The system was on the brink of collapse.  The Fed and the federal government did everything in their power to prevent it.  They pushed things into the future, but they didn’t do anything of substance to address the underlying problems.”  So, are we going to have another panic?  Williams says, “Yes, and that is the type of thing that can break at any time, and you just don’t have the options you had in 2008 for buying time into the future.”  Williams adds, “The odds are high you are going to see the beginnings of hyperinflation this year.”

There is free information on the home page of ShadowStats.com.  You also can buy a paid subscription to John Williams’ detailed reports by clicking here.