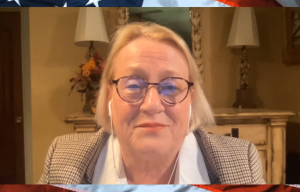 Catherine Austin Fitts (CAF), Publisher of The Solari Report and former Assistant Secretary of Housing (Bush 41 Admin.), says what is coming for the economy is pain–and lots of it.  CAF explains, “We are either in a major correction or we are going to go into a bear (market), and a lot of it depends on many different politics.  If you look at the money being pumped out . . . on climate change, on green energy, environment and all these different new sort of scams, it depends on how they inject money.  It’s either a major correction or it could turn into a bear (market).  There is no way to tell because it is purely political.”

Various Fed presidents are repeatedly saying the central bank is going to continue raising interest rates.  Why?  CAF says, “I think they are going to keep raising interest rates.  If you are Federal Reserve, you are playing a global game, and what you have to do is protect the reserve currency status.  It looks like to me they have decided that all the BIS (Bank of International Settlements) members need to be in the dollar channel.  They are doing everything they can to collapse the market share of the euro and then move that into the dollar syndicate.  I think they have to keep driving the dollar up.  The U.S dollar index is up to 113, and at one point, it was at 114.  One analyst said it was going to 120.  They have the entire frontier market and the emerging markets in a bear trap, and that is very significant power.  If you are going to go into the woods and shoot the bear, you can’t wound the bear, you have to kill the bear.  So, I think the Fed is going to keep doing this for some time now.  They don’t mind, as you learned from the pandemic, collapsing the small business side of the economy or collapsing the middle-class. . . . They are implementing the ‘Going Direct Reset.’  They are doing a currency reset.  What you are looking at is a fundamental reengineering of the governance system on planet Earth.  Most of the benefits in the dollar system come from the benefits of having the reserve currency and being able to swap money you print out of thin air for real labor and real commodities worldwide.  That’s an enormous benefit, and they are going to protect that benefit.  If they don’t protect that benefit, they run the risk of everybody moving out of the channel.  This is what the Chinese and Russians are trying to do.  They are trying to move out of the dollar channel and trying to create economic resiliency and trade outside the channel.  What the Fed is trying to do and the dollar syndicate is trying to do is protect that channel. . . . It’s global government reengineering.  It’s 100% power politics, and it’s a war.”

In closing, CAF says, “Stop helping them. . . . Don’t bank at the big banks. . . use cash whenever you can, and pray. . . . This is first and foremost a spiritual war, and prayer is the best navigation tool possible.  With this level of uncertainty and change, there is no way there is enough experts to help you and enough time to listen to them all.  You have to focus on what is important.  You have to decide, are you here to be free or are you here to be a slave?  There is no more middle of the road.  There are two sides, one leads to freedom and one leads to slavery.  You have to choose.”

There is much more in the 58-minute interview.

Join Greg Hunter of USAWatchdog.com as he goes One-on-One with the Publisher of The Solari Report, Catherine Austin Fitts. (10.15.22) 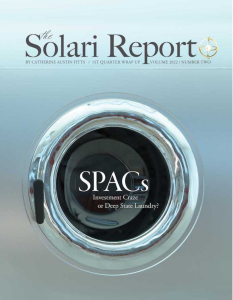 If you want to fight the New World Order and see the short videos on total control and the chip system installed in humans, click here.