Home
»
Political Analysis
»
Everything is Under Control? 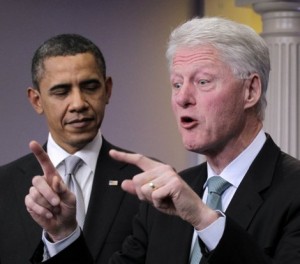 There are some big messages being put out by the government that appear to be for the sole purpose of reassuring the public that everything is under control.  Bernanke appeared on “60 Minutes” 10 days ago to tell the public that he is “100 percent” sure inflation is not going to be an issue, and that it’s a “myth” the Fed is “printing money.” I am not going to touch on the veracity of his statements.  I did that in a recent post called “CBS Allows Fed to Spread Disinformation Unchallenged.” I want to explore why the Fed Chief felt it necessary to go on nationwide television to, basically, tell America and the world that he’s on top of the economy?  He could have gone on Bloomberg, CNBC or held a press conference at the Fed and got coverage for his message.  Why didn’t Mr. Bernanke ask to be on “60 Minutes” when he announced an unprecedented second round of more than $600 billion of Quantitative Easing in early November?  That was a big announcement–what he did 10 days ago was not.

Fast forward to last Friday.  See Bill Clinton and Barack Obama on stage to announce a united front to push a new tax package that extends the Bush cuts to all.  Everyone in the mainstream media seems to describe this as “impromptu,” but I think it was staged to send the message that things are under control.  Bill Clinton enjoyed one of the best economies in U.S. history.  He is the face of prosperity and good times.  Long time ABC Correspondent  Ann Compton, during a radio interview this week, described the feeling in the room as “desperation.” The network coverage was just the opposite when it came to describing the “impromptu” press conference of Democratic Presidents.  Newsbusters.org highlighted the gushing network coverage Monday, “. . . Good Morning America’s Dan Harris raved, “That was an awesome bit of political theater. An amazing atmosphere in the room, I have to imagine.”  Reporter David Kerley saw Clinton’s Q&A as a return to the 1990s and “the form that he showed in that White House briefing room when he was President.” On NBC’s Today, Mark Halperin touted Clinton holding court with reporters for 20 minutes (after Obama exited) as “great political theater.” Finding lessons for the current president, he enthused, “Bill Clinton figured out how to compromise, but still show people he was true to his principles and fighting hard for the middle class.” (Click here to read the entire Newsbusters.org post.)

I have to admit, for a moment, I did get a warm fuzzy feeling that things were on the right track again.  Then, cold hard reality sank back in.  The Hill reported Monday, “The package could add $900 billion to the national debt, if it is made permanent, and this increases the chances the U.S. would one day default on its debt.  “From a credit perspective, the negative effects on government finance are likely to outweigh the positive effects of higher economic growth. Unless there are offsetting measures, the package will be credit negative for the US and increase the likelihood of a negative outlook on the US government’s Aaa rating during the next two years,” Moody’s analyst Steven Hess writes.” (Click here fro the complete Hill post.)

I could be making something out of nothing–then again, maybe not.  And, maybe this was an “impromptu” press conference and maybe not.  What if the government is really just trying to reassure the public so if something bad does happen, it can head off a panic?  The list of possible problems is real and enormous.  A sudden war in the Persian Gulf could be a nasty surprise.  There are still bank solvency questions and the government sanctioned accounting fraud that is designed to make banks look healthy when, in fact, they are not.  And let’s not forget, Moody’s is threatening to downgrade U.S. debt!  It is absolutely critical to the U.S. for the world to view its debt as a safe investment.  In a recent post, Theeconomiccollapseblog.com writes, “ So if there comes a point when the market for U.S. Treasuries completely collapses, it is going to cause unprecedented financial chaos.  The worldwide derivatives market, which is already highly unstable, would almost certainly implode.  Credit markets all over the globe would seize up.  Global trade would quickly grind to a standstill.  This isn’t going to happen overnight (hopefully).  Rather, the loss of confidence in U.S. Treasuries is something that is likely to take months or even years to play out.  But once that confidence is gone, it is not something that will be able to be rebuilt easily.”  (Click here to see the entire report from Theeconomiccollapseblog.com.)

Economist John Williams of Shadowstats.com has been tracking plunging tax receipts and soaring Federal deficits.  He has been predicting that chances are increasing the U.S. could experience a sudden and severe dollar sell-off.  This, in turn, could lead to hyperinflation.  In his latest report, Williams says this about extending the Bush tax cuts, “The proposed package would not trigger a recovery, and it would not forestall the intensification of the double-dip recession.”

The more government spin doctors give the public reassuring words and contrived images that project an air of serenity and confidence, the less I feel “everything is under control.” I get the feeling that something bad is coming–and soon.  I hope I am just being too pessimistic.