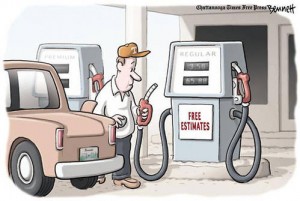 A good friend of mine, who has family living abroad, called me this weekend. One of the first things out of his mouth was about his sister in London and how she was dealing with “terrible inflation.” No doubt he was talking about the spike in gasoline prices that have risen to more than $8 a gallon. (The official inflation rate in the UK is around 3.6%, but I’m sure the numbers over there are as reliable as the inflation numbers in the U.S. where fuel and food are not counted in the so-called “core” inflation.)  Part of this price spike is due to Iran cutting off crude oil shipments to the EU recently, but part of it is the fact the UK has been engaging in quantitative easing (QE), or money printing, to help its ailing economy and insolvent banks. Just in the last few weeks, it announced another $50 billion in QE. The UK is not alone as most Western countries are engaging in QE to prop up an insolvent system bloated on bad debt.

“Inflation is always and everywhere a monetary phenomenon.” This famous quote from Nobel Prize winner Milton Friedman really says it all about what is happening to fuel prices and inflation. The Federal Reserve is creating trillions of dollars in new currency to paper over the meltdown of 2008 and stave off a sovereign debt crisis in Europe. Oil is priced in dollars; so, of course, fuel prices are rising around the globe. An article on Zerohedge.com, last Friday, predicts oil hitting $200 a barrel in the next 5 years, but I think we will hit that mark much sooner. The post unabashedly said, “The sole reason why crude prices are surging . . . is because global liquidity has risen by $2 trillion in a few short months, on the most epic shadow liquidity tsunami launched in history in lieu of QE.” (Click here for the complete Zerohedge.com story.)

According to millionaire investor Jim Rogers, the Fed has already started its third round of QE. In an interview on Reuters, last week, Rogers said, “We already have QE3 … Get out the Federal Reserve’s balance sheet. You’ll see that they’ve been pumping up – you can see unadjusted M2 is going through the roof. Look at their balance sheet. … All sorts of assets are suddenly appearing on their balance sheet. Where did they come from? They didn’t come from the Tooth Fairy; they came because they’re in there buying in the market as fast as they can. There IS QE3 already. They don’t call it that but it’s there.” (Click here to hear Jim Rogers. This quote is at the very end of the clip.) Short term, Rogers likes the dollar, but he’s not a long term holder of the buck.

Adding to the money creation is the European sovereign debt crisis with Greece at the tip of the debt iceberg. The banks will be kept afloat at all costs instead of liquidated. According to Jim Willie of GoldenJackass.com, massive amounts of new money will need to be created out of thin air to keep the Western banking system solvent. In his most recent report, Mr. Willie said, “The zinger is the recapitalization of the banking system, an urgent need and requirement, the understood impact from the imposed Greek comprehensive solution. Expect more favored treatment to the banks. However, as they are put back on solvent feet, a process only possible with vast hyper monetary inflation directed specifically at the banking pillars, the retribution from within the system will possibly be the first serious price inflation leakover. For over three years, the monetary inflation leakover has been contained, to the detriment of the economy.” (Click here to read the complete post from GoldenJackass.com.) Nothing will signal a tsunami of inflation (caused by currency creation) faster than rising oil (and gold) prices. I think it is a lock that people around the planet will be paying much higher prices at the pump.

President Obama is saying the recent spikes in gasoline prices are not his fault and said, last week, there “are no quick fixes to this problem.” He is right about one thing, there are no quick fixes. The problem is not one of supply, but of too many dollars created to bail out Wall Street banks that should have gone into bankruptcy. Prices for regular gasoline in America are approaching $4 a gallon and, in some places, they are approaching $5 a gallon. According to a post on Forbes.com titled “Gasoline Prices Are Not Rising, the Dollar Is Falling,” relative to the price of gold, gasoline is cheap. The report said the average for the last 493 months has been “.0732” ounces of gold per barrel of oil. Right now, the ratio is about “.0602” ounces of gold per barrel. Are you getting this? Either gold prices have to go down or oil prices are headed higher to equal the nearly 500 month average. The report goes on to say, “At this point, we can be certain that, unless gold prices come down, gasoline prices are going to go up—by a lot. And, because the dollar is currently a floating, undefined, fiat currency, there is no inherent limit to how far the price of gold in dollars can rise, and therefore no ultimate ceiling on gasoline prices.” (Click her for the complete Forbes.com report.)

If there is war in the Middle East (as I expect), it will be like lighting a match in a room full of natural gas. Prices will explode for fuel and just about everything else, and talk of the so-called “recovery” will finally cease.