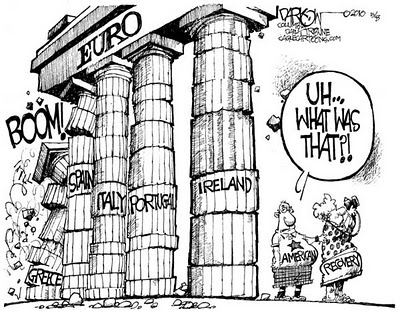 The Western financial world is officially in full panic mode.  A nearly $1 trillion bailout of Greece confirms that fact.  Our very own Federal Reserve is providing billions to the effort, but this is much more than a bailout for Greece.  It is a bailout for banks holding Greek debt and the debt of other European nations teetering on default.

This bailout is not a fix or a cure for too much debt.  People on both sides of the pond are simply spending more than they earn.  The “fix” is a long painful road of consuming less and saving more, but that is not what this bailout represents.  What the leaders of the Western World chose was the short painless path of money printing.  You have to ask yourself where did they come up with nearly a trillion dollars in such a short amount of time?

If real assets were used for this bailout, it would not be done.   Think about this for a minute.  Let’s say for the American part of this rescue we had to put up half of New York State for collateral.  Does the thought of that much prime land frittered away make you squeamish?  How about putting up 500 million barrels of oil out of the Strategic Petroleum Reserve?  Too valuable you say?  Then maybe a couple thousand tons of gold out of Fort Knox would be okay to use, after all, it’s just sitting there (I hope).   Doesn’t this sound absurd?  It sure does because these are real assets and printed money is not.   This is why the U.S. Fed is using dollars created out of thin air to help bail out its banking buddies in Europe.  It is the easy way out, at least at the beginning.

In the end, this kind of reckless desperation will cause every dollar you spend and save to be worth less.  If the Fed prints too many dollars, then they’ll be just plain worthless.  What do you suppose will happen when California, Illinois, Florida or any one of more than a couple of dozen U.S. states all gets into the same trouble as Greece?  Do you think the Fed will let them fail or print more money and bail them out too?  I’m going with a giant money printing bonanza right here in America.  I covered some of this in a February post called “America Has Its Own PIGS.”

Gold buyers see what’s coming, and prices are being bid up.  Gold set a new all time high this week.  Why?  Money, or the buying power of money, is systematically being destroyed by current and coming bailouts.   The new money is gold and Congressman Ron Paul agrees.  He said earlier this week, “Gold, all of a sudden, started acting differently.  It started acting as a currency rather than just reacting to the value of the dollar or other commodities . . . Gold has been money for 6 thousand years and it’s going to remain that way, and it will rule the roost . . . It’s telling us that the dollar is actually very weak . . . when you measure it against gold.”  Silver is also rising in price.  When gold rockets high enough in price, then silver will also be considered money.

This so called bailout will just extend the game.  The question is for how long?  To be frank, I do not know how this will finally shake out.  The two things you can count on for sure:  there will be some very big inflation–and gold is money.