Home
»
Weekly News Wrap-Ups
»
All Trump All the Time, Bad Economy Sold as Good, Lucifer is In Style-NOT 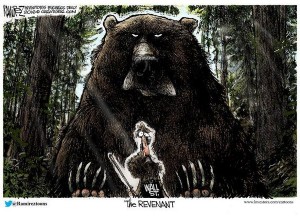 Trump talks, he makes news. Trump doesn’t talk, he makes news. Trump tweets, he makes news. Trump offends, he makes news. Trump makes sense, he makes news. You may think what is going on with Donald Trump is all about Trump, it is really about the changing landscape of media and the old mainstream media (MSM) losing its relevance. Look at what just happened with Trump and this debate fiasco with FOX. FOX thinks it’s still running the media show, and Trump is showing them they are not. When you hear about Trump tweeting, switch out the word ‘tweet’ with ‘broadcast’ and there you have it. Trump, via the new media such as Facebook and Twitter, doesn’t need a network of TV stations or a cable outlet. The mainstream media is so freaked out they cover each and every tweet of Trump’s so as to not miss out and retain some relevance. No front-runner would have ever turned down a TV appearance until now. Why did he turn it down–he doesn’t need it. The MSM needs him. Times are changing, and the MSM is losing its grip in media and thus its relevance. Of that there is no doubt.

The USA Today finally stopped saying we are in a recovery. You know why? Because we are not in a recovery, at least not for Main Street, but that doesn’t stop them from pushing what I think is a false narrative. For example, this week in the money section, they come out with a title that says “3 Reasons You Shouldn’t Worry About the Stock Market in 2016.” Never mind the stock market has plunged and is off to the worst start—ever. Never mind there is a Plunge Protection Team. Never mind there have been banks convicted of massive hundreds of trillions of dollars of fraud with commodities, interest rates and currencies. This article basically says buy good stocks and don’t worry and “don’t care.” I say “Run Forrest Run.” And so does David Stockman, who is a best-selling author and a former White House Budget Director. He will be on Sunday for the “Early Release.”

The standoff in Oregon is winding down, but not before one of the protesters was shot dead by the FBI. Details are sketchy, and the Feds are not saying why one protester was shot at a road block. At its core, this is about the question: who owns public land? Is it “We the People” or the federal government that can use the land as it wants, even if it hands out goodies to their donors and cronies. This is not the last time you will hear about this issue.

FOX is giving Lucifer a makeover. What??? The Devil is evil, yet, with FOX, and this new series, not so much. The Devil is a liar and a deceiver and everything he touches turns to rust or manure. Shame on FOX. For as the Bible says, “Woe unto them that call evil good, and good evil; that put darkness for light, and light for darkness; that put bitter for sweet, and sweet for bitter!”