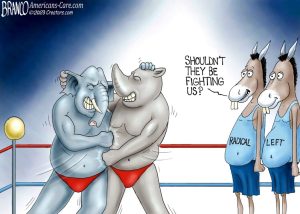 Minority House Leader in the GOP, Kevin McCarthy, finally was elected to Speaker of the House on the 15th vote.  Looks like the back-room deals, threats and pleas did work for RINO McCarthy.  According to one poll, McCarthy has less than half of GOP voters in his corner.  The 20 Representatives who were a firm “NO” vote, were whittled down to just a few, and they voted “present.”  The swamp won this round, but there are many more fights in the future.  Don’t be discouraged.  McCarthy gave up a lot to get in, and he will have to give in much more than he expected to get any legislation passed in the 118th Congress.

My prediction for 2023 was people would finally wake up to the CV19 bioweapon/vax that did not save a single life.  It was only meant to hurt and kill the people who fell for the CV19 psyop.  Now, there is a new poll out that says approximately 73 million Americans know someone who was killed by the CV19 bioweapon/vax.  If this is the case, what will the awakening be like come April, May or the end of 2023?  When will the arrests and lawsuits be starting?  That is the only question now.

The Fed keeps fighting inflation, and that means it’s going to keep raising interest rates and hold them higher for longer than anyone has been forecasting.  At some point, the Fed will pivot, but lots of damage will be done between now and then.  What is the one thing central banks all over the world are buying now?  It’s gold.  They are getting ready for the so-called Fed pivot for lower rates and the return of easy money sometime between now and the end of 2023.  When it happens, experts say get ready for another big inflation spike.  It has long been said in financial circles that gold does well in the extremes.  Meaning, it will be a good investment in both times of deflation and inflation.  Looks like we are going to be seeing both pretty strong in 2023 and beyond.  Oh, almost forgot, Goldman Sach is loving gold for a 2023 investment.

There is much more in the 47-minute newscast.

Join Greg Hunter of USAWatchdog.com as he talks about these stories and more in the Weekly News Wrap-Up for 1.6.23.

Fed expert and corporate watchdog John Titus will be the guest for the Saturday Night Post.  He will tell us what he thinks of the U.S. dollar, central bank digital currency (CBDC), the Fed and the economic prospects for 2023.  (John Titus on YouTube click here)