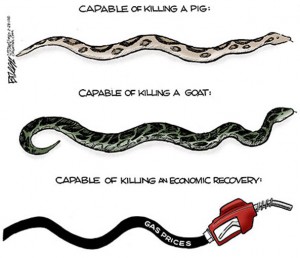 Buying gasoline these days has turned into a horror show.  I filled up my car and handed the attendant a $50 bill to turn the pump on.  I had a little more than a quarter of a tank.  So, I thought that would do the trick and peg the needle past full with change to spare.  I was wrong.  I stood in shock as the pump rolled right past $40 and up to $50.  The car (which is a Buick Lacrosse) was still not quite full.  I thought, $50 is not enough to fill up a standard size car with already more than a quarter of a tank?  You could say fuel has gotten expensive, but in reality, the dollar is losing its buying power.  Money printing and monster deficits in America are the big problems for the buck.  The more dollars we produce, the less each one is worth.  The rest of the world has been noticing and moving away from the dollar.

Oil and almost everything else is traded mostly in U.S. dollars globally, but that is changing.  There has been a definite move by some of the biggest economies in the world in the last few years to not trade in dollars.  China is the second biggest economy in the world and is leading the charge to do business in its own currency–the renminbi.  The Financial Times reported last week, “China has signed a $31bn currency swap agreement with Australia, a step towards boosting the renminbi’s profile in developed markets.  Beijing has established nearly 20 bilateral swap lines over the past four years, but Australia ranks as the biggest economy yet to sign such a deal, which analysts said could give a shot in the arm to Beijing’s goal of internationalising its currency.”  (Click here for the complete FT.com story.)  This is bad news for the dollar in the long term.

China is also doing business in Saudi Arabia.  It is building a new gigantic oil refinery that is slated to be operational in 2014.  China is already a key Saudi oil importer, and the upcoming refinery will make the two countries even more intertwined.  Is there any reason to believe China will not want to bypass the greenback?   A story last week on TheEconomicCollapseblog.com said, “Essentially, China is running circles around the United States when it comes to locking up strategic oil supplies worldwide.  And all of these developments could have tremendous implications for the future of the petrodollar system. . . . So what happens if the petrodollar system collapses?  Well, for one thing the value of the U.S. dollar would plummet big time.  U.S. consumers would suddenly find that all of those “cheap imported goods” would rise in price dramatically as would the price of gasoline.  If you think the price of gas is high now, you just wait until the petrodollar system collapses.”  (Click here for the complete story from TheEconomicCollapseblog.com.  It is really good!)