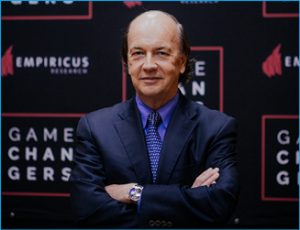 Five time. best-selling financial author James Rickards contends all this money printing to retard the effects of CV19 is not going to produce inflation—just the opposite.  Rickards explains, “Let’s say I go out to dinner and I tip the waitress.  The waitress takes a taxi home, and she tips the taxi driver.  The taxi driver takes the tip money and puts gas in his car.  In that example, my $1 tip had a velocity of three:  the waitress tip, the taxi tip and the gasoline.  So, my $1 produces a velocity of three.  My $1 produces $3 of goods and services.  That’s velocity, but what if I stay home, don’t go out and don’t spend any money?  In that case, my money has a velocity of zero.  $7 trillion times zero is zero.  If you don’t have velocity, you don’t have an economy.  The $7 trillion is the base money supply, and that could be $8 trillion or $9 trillion . . . and that by itself does not produce inflation.  What you need is turnover, and we are not getting that.”

Rickards says, “Initially, the problem right now is deflation and not inflation, but deflation.  There is too much debt.  Growth is too slow, and the psychology is wrong because people are saving and not spending.”

Rickards new book titled “The New Great Depression” is predicting rough times for the U.S. economy, but not every asset will be a loser.  Rickards says, “In August of 2020, gold hit a new all-time high.  Silver is not at an all-time high, but it has performed very well.  Actually, if you break down asset classes with silver, gold, stocks, bonds, oil, etc., the number one performing asset class was silver, and the number two was gold.  Silver was up about 47%, and gold was up about 25% give or take.  Gold and silver outperformed stocks and all of the other asset classes, but they are going to go a lot higher and they have to. . . . Gold is going to $15,000 per ounce, and by the way, that is my forecast. . . . Silver will be three figures ($100 or more per ounce.)  Deflation is a bigger problem than inflation, and everybody hates inflation, but you need inflation . . . . What you have to do is inflate the debt away.  The debt is $22 trillion . . . we will devalue the dollar by 50%, and that is what you have to do.”

Rickards says this will be a process that will take almost two decades, and the U.S. will need 4% inflation to do it.  This is why Rickards thinks gold and silver will go much higher in the coming years.  Rickards also says the central banks are net buyers of gold and will continue to be.  He says everybody should have gold and silver in their portfolios and points out he does not sell any precious metals.  Rickards also gives advice on surviving “The New Great Depression” in his latest book.

Rickards thinks if Biden does make it into the White House, his policies will make it much harder for the U.S. to recover than if Trump wins another term.  Rickards says, “Biden Administration policies will impose major headwinds on an economy that is already struggling.”

If you want to buy a copy of “The New Great Depression,” click here.  The book will be released next week.