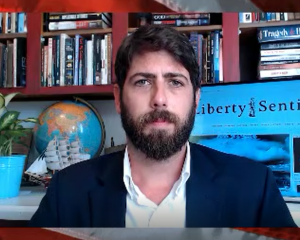 Journalist Alex Newman says the virus crisis has exposed the financial debacle of the $5 trillion shortfall in state and local pensions. Senate Majority Leader Mitch McConnell says “states should file bankruptcy.” President Trump says a “federal bailout would not be fair.” Treasury Secretary Mnuchin says states are “not going to be bailed out.” As unemployment soars by the millions and taxes implode, pensions are running out of money to pay lavish benefits promised to public workers. Newman contends, “It’s unsustainable, it’s a rip-off, it’s a scam. These people are being used and manipulated, too. The reason Democrat politicians agree to these things is not because they love police and firefighters, it’s because they want the votes from big labor. It’s a really nasty political machine, and I was happy for Senator McConnell to talk about this. What you have here is huge government employee unions run by communist, radical leftists, Deep State operatives that suck up all this money . . . and then they recycle that money back into the campaign coffers of Democrat politicians. . . . Then they say, oh sure, we will give you a bigger pension, and, sure, we will give you more benefits, and it’s a vicious cycle. . . . They have been creating this massive Ponzi scheme, and now they are saying coronavirus caused this, and now we need a federal bailout. Sorry, it’s not going to work. . . .A lot of these issues are now getting exposed. This is the first time in years that we are having a national discussion about this tsunami that’s about to swallow up our economy.”

Newman also says, “Right now, President Trump is talking about rebuilding our infrastructure. One reason our infrastructure is crumbling is 1/4 to 1/3 of our state and local government budgets are going to fund public pension plans. This is a good opportunity to rebuild our infrastructure, but we have to use some common sense here. We can’t keep paying these enormous pensions.”

In closing, Newman says, “The idea that the federal government cannot bail everybody out is self-evidentially ludicrous. The government can’t bail out the workers, the companies, states, local governments and the churches. It is self evidentially ridiculous. I hope President Trump can make some progress on it, but the task is so big and so complicated I feel like it would take a miracle to have some success on this.”

Join Greg Hunter of USAWatchdog.com as he goes One-on-One with Alex Newman, International Correspondent for The New American Magazine and founder of LibertySentinel.org.

Alex Newman is a writer for TheNewAmerican.com. Newman also has his own website called LibertySentinel.org.  You can find his latest article on the top right side of the home page that’s called “Despite Bailout, Pension Tsunami Threatens to Crush US.”   Both sites are free and packed with original analysis and reporting.