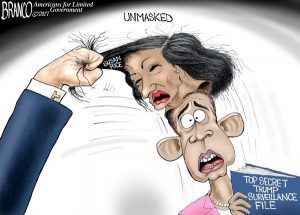 The “War Card” has been flipped over as President Trump orders an attack on Syria. The attack came as a response to the chemical weapons attack in Syria allegedly by the Assad regime.  Not everyone is buying the story it was Assad that ordered a gas attack on his own people.  Former Congressman Ron Paul thinks it was a false flag to get the U.S. to make a move against Assad.  Now, the U.S. foreign policy in Syria has gone from destroying ISIS to removing Bashar al-Assad from power in Syria.  Russia will surely weigh in.  Will the Russians stand by and allow Assad to be attacked and removed by the U.S.?

One of President Obama’s top advisors has admitted to “unmasking” members of the Trump transition team. Rice says she did nothing wrong and did not do it for political reasons.  Republicans think differently and say Rice should testify under oath because this is a huge Constitutional crisis of an outgoing administration spying on an incoming administration to embarrass and undermine it.  Other former top Obama Administration officials have also admitted to spying on Trump and leaking classified information.  The spying was done for the so-called Russian collusion investigation, but after 8 months, the FBI and investigators have zero to show and no wrongdoing has been found.

The Federal Reserve has announced it will be shrinking its balance sheet. During the last housing meltdown in 2008, it bought the underwater assets of big banks.  It has more than two trillion dollars in mortgage-backed securities that are now worth something because of the latest housing boom.  Gregory Mannarino of TradersChoice.net says the Fed is signaling a market top in housing.  It pumped up the mortgage-backed securities it bought by inflating another housing bubble.  Now, the Fed is going to dump the securities on the market.  Mannarino predicts housing prices will fall and interest rates will rise.

Clif High from HalfPastHuman.com will be the guest in the “Early Sunday Release.” High has a brand new report for his Internet data mining project that he calls “Predictive Linguistics.”  High talks about a crash much greater than a financial crash—a crash in several global government’s ability to function.  High also talks about what’s ahead for the dollar, gold and silver.