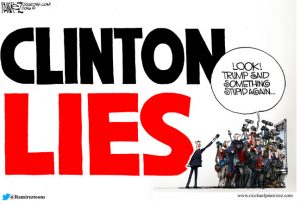 The mainstream media (MSM) is totally against Donald Trump, and they are proud of it. Now, the New York Times (NYT) is explaining why it is their duty of keep Trump out of the White House.  An Op-Ed piece this past week basically said it was Trump’s fault that the MSM had to turn into political attack dogs for the DNC because Trump was “abnormal and potentially dangerous.”  Of course, there is nothing about the lies upon lies of Hillary Clinton or the “extremely careless” nature of her unprotected servers and use of private email system or her “Foundation” that some call a “Huge, huge criminal conspiracy.”  Trump is the “reckless” one who has to be stopped with lies and false stories according to the MSM, while they have to totally cover up and ignore Hillary’s many lies and potential criminal activity.  I predict this will backfire in the face of the old time legacy media—big time.

Meanwhile, yet another batch of emails have been released that, once again, point to the fact that Hillary Clinton’s State Department was arranging deals and favors in return for Clinton Foundation “donations.” Donald Trump said this week, “These people are crooked.  They have been crooked from the beginning. . . . You look at that foundation, it’s pure theft and pure crookedness.”

Finally, talks between the Russians and Ukrainians have broken down. Vladimir Putin said he was walking away from international peace talks to try to end the conflict in Eastern Ukraine.  Putin called the talks “meaningless.”  On top or that, both Russia and Ukraine beef up military operations on the Ukrainian border with Russia.  Ukraine reportedly has put its troops on combat alert as tensions mount between the two countries.

Bill Murphy, Founder of GATA (Gold Antitrust Action Committee), will be the guest for the Early Sunday Release. Murphy says the metal to watch is silver, and that is the precious metal that will ultimately break the cartel.  Murphy expects a dramatic breakout in price to the upside in weeks or months to come.