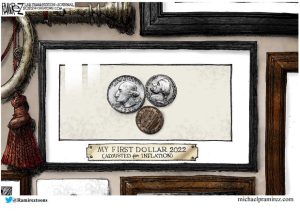 The US  dollar is under serious threat to be steeply devalued.  How is that going to happen?  Looks like Saudi Arabia is considering accepting Chinese yuan for oil instead of only US dollars.  Maybe this is a reaction to the US nuclear deal with Iran being pushed by the Biden/Obama Administration.  Iran and Saudi Arabia are bitter enemies.  If Saudi Arabia does accept yuan for its oil, there is nothing stopping other OPEC nations from doing that either.  This has the very distinct possibility of crashing the value of the dollar and delivering a kill shot to its use, at least in a large part of the world.  Inflation would skyrocket even more than already occurring now in the USA as unwanted dollars would return home.

The Obama/Biden Administration is sending $13.6 billion to Ukraine.  It is also sending an additional $800 million in what is being called “lethal aid.”  Lindsey Graham is still calling for the assassination of Russian leader Vladimir Putin, but other than that, there has not been a single plan or goal revealed by any one Republican or Democrat about how this massive spending is going to end the conflict in Ukraine.  I ask what are the goals and plan for sending billions to Ukraine?  There are zero answers coming from anyone in the Washington swamp.   You might as well call this hairbrained move “Lethal Stupid.”

The Fed is talking about raising interest rates in the face of 40-year high in inflation.  It’s 7.8% officially, but people like economist John Williams of Shadowstats.com says it’s really 16%.  Williams also says the economy is not spiking, it’s tanking.  Williams says rate hikes will tank it even faster than it’s already going down.  Brace for impact because inflation is here to stay, and it’s going to get much worse.

Join Greg Hunter as he talks about these stories and more in the Weekly News Wrap-Up for 3.18.22.

World renowned lung doctor and Covid expert Dr. Pierre Kory will be the guest for the Saturday Night Post.  The Vax and Covid problems are getting worse.  Dr. Kory will arm you with knowledge on how to fight back.