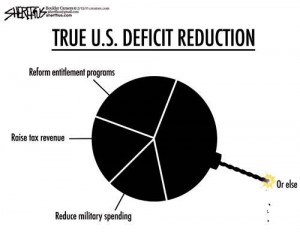 Yesterday, gold hit fresh all-time highs at $1,432.10 an ounce. Silver hit a 31 year high, closing at more than $34.50 per ounce. Oil nearly touched $100 per barrel, which is the highest it has been since September 2008.   What’s going on?  Part of the price spikes are, no doubt, due to riots and rebellions in the Middle East, but it is also the world’s awakening realization America’s crushing debt will never be repaid in real money.  The U.S. needs to slash its budgets, but finding politicians on Capitol Hill with the nerve to make deep cuts is elusive, to say the least.  Yesterday, the Associated Press reported, “The Republican-controlled House is on course to pass legislation cutting federal spending by $4 billion and averting a government shutdown for two weeks. And Senate Democrats say they will go along. . . . Republicans want to slash more than $60 billion from agency budgets over the coming months as a down payment on larger reductions later in the year, but are settling for just $4 billion in especially easy cuts as the price for the two-week stopgap bill.”  (Click here for the complete AP story.)

Over in the Senate, the Banking, Housing and Urban Affairs Committee asked questions of Fed Chief Ben Bernanke about the state of the economy and raising the debt ceiling.  It currently stands at $14.3 trillion.  Senator David Vitter said “the biggest” problem the nation faced was “reaching our debt limit . . . sometime between late March and May.”   Senator Vitter asked Mr. Bernanke, “Would it be better to increase the debt limit and go along our merry way on the present fiscal path or would it be better to increase the debt limit and at the same time pass meaningful budget reform?”  I really do not see how cutting $60 billion is “meaningful reform” when PIMCO’s Bill Gross said two months ago on CNBC, “We have a deficit in the $1 trillion plus arena, which means we must borrow at least a trillion dollars additional a year in order to fund the deficit.  And, so, the debt ceiling currently at $14.3 trillion, which is 95% of GDP, has to go up by another trillion or so every 12 months.”  (Click here to read more about raising the debt ceiling.)

Bernanke responded to Senator Vitter’s question by saying, “Clearly, the latter.  You want to make sure the debt is paid, interest is paid, and meaningful budget reform is highly desirable.  I’m just concerned that there could be a significant probability that we would not raise the debt limit, and that would cause real chaos…This is money we’ve already borrowed.  These are commitments we’ve already made to contractors, to senior citizens and so on…”

I take “and so on” to mean the continued bailout of the banks through vehicles such as failed mortgage giants Fannie Mae and Freddie Mac.  The government just forgave Bank of America for potential future claims of $127 billion worth of sour loans.  (You can read the complete story in a post I wrote called “B of A Settlement, Another Taxpayer Rip-off.”)

The government (Fannie, Freddie and FHA) is supplying more than 90% of the mortgages in America.  When asked how commercial banks could be enticed to come back into the residential mortgage market with new mortgage-backed securities (MBS provide financing), Bernanke touted recent financial reform (Dodd-Frank) and said, “What we saw in the crisis where firms would take a whole bunch of lousy mortgages and then use financial engineering to make them into triple-A securities, that should not be possible anymore if the credit rating agencies meet certain standards.”

I could not believe my ears!  Bernanke cavalierly admitted banks bundled “lousy mortgages” (into MBS) and ripped-off buyers.  I wonder how many of those “lousy mortgages” are on the balance sheets of Fannie, Freddie and pension funds!  This is probably trillions of dollars in securities and, yet, Mr. Bernanke made that statement with a smirk.  It was as if he was saying “problem solved.”

Maybe it takes a giant fraudster to spot a giant fraud?  And, maybe, the rest of the world is running to gold, silver and oil because they fear the dollar is dying at the hand of the printing press while inflation is thriving.