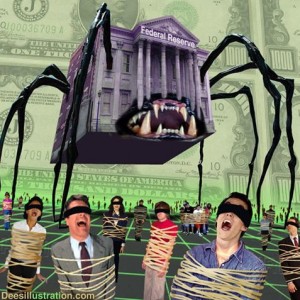 It’s not exactly the kind of audit Congressmen Ron Paul and Alan Grayson wanted in their original legislation, but it looks like their wish to peel away some of the Federal Reserve’s secret deals in lending and the securities market will be exposed for the first time in history.   The House and Senate are working to reconcile two similar bills and make them into one to put on the President’s desk.

Last month, the Senate rejected the House version and replaced it with a watered down audit of the Fed.  A stronger compromise was offered by Representative Barney Frank last Wednesday, and the Senate accepted it.  Here’s how the Washington Times reported the story: “The compromise instead requires the Fed to post extensive details about its 2008 rescues of American International Group, Bear Stearns and other big financial institutions – which provoked a firestorm in Congress last year – while authorizing the GAO to audit future emergency Fed cash infusions for financial institutions.  The Fed would also have to regularly disclose information about its daily transactions with Wall Street banks through its discount lending window and securities market operations in New York, with a two-year lag.”  (Click here for the complete Washington Times story.)

The Huffington Post has been giving extensive coverage to the Fed audit story.  It has been one of the few news outlets to cover the legislative process from the beginning.  Here is part of  their story, “The House proposal allows repeated future audits of discount window and open market transactions, whereas the Senate proposal had only allowed a one-time audit.  The Senate’s provision had already been stronger than what the Federal Reserve and Treasury Department had previously been willing to accept.”  (Click here for the complete Huffington Post article.)

It is no secret the Fed has been fighting any audit and lobbied to kill the bill.  Co-sponsor of the original House legislation (HR 1207), Alan Grayson, thinks Treasury Secretary Tim Geithner has the most to lose in an audit.  Geithner was head of the New York Fed during the Financial meltdown in 2008.  The Treasury Secretary has openly opposed any audit of his former employer.  “When Tim Geithner says he doesn’t want to see the Fed audited, what he’s really saying is that he doesn’t want to see Tim Geithner audited,” Grayson said on ABC’s “Top Line” webcast. . . .  But Grayson, who is known for his tough broadsides against opponents, indicated Geithner may have had a role in enacting “secret bailouts and loan guarantees” to large corporations, while New York Fed chairman during the Bush administration.  “It’s one of the biggest conflicts of interests I have ever seen,” he said.  (Click here for the complete story from Michael Moore.com.)

Grayson is not disappointed he did not get everything he wanted from the legislation.  In May, when the Senate passed its watered down version, he said, “. . . let’s not lose sight of what we have accomplished so far – real independent inquiry into the Fed, and its incestuous relationships with Wall Street banks. For the first time ever.  Our calls, emails, lobbying, blogging, and support really mattered. We made it happen.  Today, we beat the Fed.”

Famous Gold investor, Jim Sinclair (jsmineset.com), has a little different take on the legislation.  I talked to him a few days ago about the financial meltdown and actions taken by the Fed to keep the economy from tanking in the fall of 2008.  He said, “It was perfectly legal for them to lend to partnerships, hedge funds and individuals just as they did bail out the banks.  That’s where the real meat of an audit is and that’s where no audit will ever take place.”

The House and Senate are still working on the details of the final bill.  The Fed audit is definitly not all it should be, but at least it’s a start.