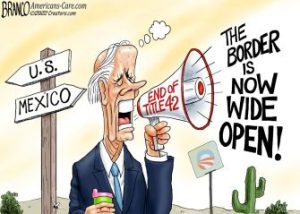 Don’t expect the war between Russia and Ukraine to be over anytime soon.  VP Biden is asking for another $33 billion in military aid for Ukraine.  The plan is to drag out the war and turn it into a quagmire to weaken Russia.  This goofy and reckless path was recently admitted to by Secretary of Defense Lloyd Austin.  What on earth could go wrong, especially with the southern border of the U.S. wide open for any enemy to cross over?

Inflation is here to stay, and it is getting worse.  In the first leg up, energy led the charge for higher prices at the pump.  Now, food inflation is growing with shortages on the horizon, according to Bob Unanue, CEO of Goya foods.  He said on FOX Business “the world has weaponized food.”

Surprise!  The first quarter was a negative 1.4%, and the Biden Administration policies are to blame.  Now, the Fed is so worried about inflation it has said it is going to raise interest rates, but instead of fighting inflation, it looks like it will kill the economy altogether.  Inflation, shortages and coming unemployment for a skidding economy will add more pain that is already baked into the financial cake.  Look for a big revaluing of the U.S. dollar sooner than later, and expect more chaos and not less.

Join Greg Hunter of USAWatchdog.com as he talks about these stories and more in the Weekly News Wrap-Up for 4.29.22.

Four-time, best-selling financial author James Rickards will be the guest for the Saturday Night Post.  The economy is in big trouble, and Rickards will explain how big and what you can do to protect you and your family.