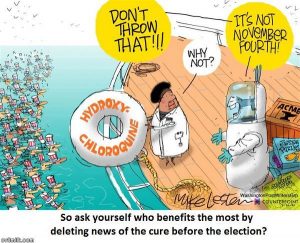 If you want to know who to blame all the violence on, you can find many guilty parties.  It’s billionaires like George Soros funding prosecutors that will not prosecute in liberal cities.  It’s Black Lives Matter and Antifa.  It’s some of the biggest corporations in America, and it’s most definitely the mainstream media that hides the facts and acts as a biased information arm of the communist/Marxist Democrat party.  It’s not journalism.  It’s propaganda, and it’s helping to fuel the violence in America.

The voter fraud schemes by Democrats are emerging and seeing the light of day.  They are blatant attempts to swing the November Election through voter fraud and so-called ballot harvesting.  No doubt, this is going to end up in the Supreme Court, which is why Trump wants his pick on the bench by Election Day.

Dr. Chris Martenson from PeakProsperity.com will be the guest for the Saturday Night Post, and he will tell you what you need to do now to better cope with the coming calamities for the rest of 2020 and beyond.