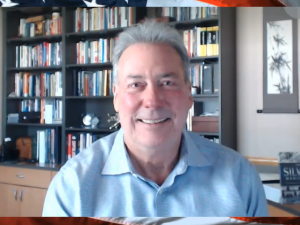 Economic analyst and financial writer David Morgan says, at some point in the not-so-distant future, the world is going to have another banking crisis.  Morgan contends in the next financial crisis, the banks are going to take depositors’ money in what is called a “bail-in.”  Morgan explains, “We have this saying in the precious metals world, and that is ‘If you don’t hold it, you don’t own it.’  Let’s move it over to the currency realm.  What if you had that same idea that if you don’t hold it, you don’t own it?  The reason why that is so important to me and many others is the bailout situation is over.  It will be bail-ins next time, which means you become an unsecured creditor of the bank.  This means that if you don’t hold it, you may not own it.  If we were to have a bail-in . . . they may not take all of your currency, but they would probably take part of it. . . . If you go to Argentina during one of their episodes, all the money in their banks was still yours, but you were limited to what you could take out.  You could be a millionaire or a multi-millionaire, but you could only take out 300 pesos a week.  So, what good is that?  If your mortgage was 4,000 pesos a month and you can only get 300 pesos a week, you would default on your mortgage.”

How much actual cash is out there for you to hold?  Morgan says, “M-Zero is the monetary base. That is paper money and coins, and in a round number it’s about $2 trillion.  That is a bigger number than what I thought.  Another interesting thing is there are 12 billion $100 bills.  (That equals $1.2 trillion in $100 bills.)  So, the vast majority of the supply of Federal Reserve Notes are in $100 bills.”

Morgan suggests that you have one to three months cash at home for expenses like rent or mortgage, food and utilities.

Morgan also likes gold as an investment, but he especially likes silver.  Morgan says, “Silver is totally undervalued and is the most undervalued asset out there.”  Morgan contends that “silver is at near record lows” at around $23 per ounce if adjusted for inflation and massive Fed money creation.

Another reason to hold physical gold and silver is inflation is starting to take off in a way most people can clearly see now.  Even the Fed knows the inflation genie is out of the bottle, and it’s not going to be put back in anytime soon.

In closing, Morgan suggests holding some cash, gold and silver in physical form for safety and security.

There is much free information and videos on the homepage of TheMorganReport.com.

To get a copy of “The Silver Manifesto,” click here.

(USAWatchdog.com is posting these links as a courtesy and does not get paid by David Morgan in any way.)