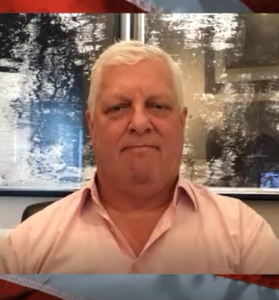 Macroeconomic analyst Rob Kirby warns massive money printing in the billions of dollars each and every day by the Fed in the repo market is “a sign we are getting close to the end.” Kirby says the world is awash in fiat money and contends, “We are being primed for a major, major catastrophe in the financial world. I believe we are probably on the eve of it in that something nasty comes our way very, very soon. The amount of money being created is so much bigger than what is being acknowledged. It wreaks of desperation. Metaphorically, someone is driving around and they’ve got a dead skunk in their trunk, and they are wondering what the smell is. I can smell what is going on in the financial world, and it stinks. It stinks beyond belief, and the whole world is waking up to it. The smart ones are waking up like the German central bank, and they are resuming purchasing gold. . . . The biggest signal is the German Bundesbank is buying gold. They were part of the club. It’s been forbidden for any central bank in the western world to buy gold for many, many years now, and when the German Bundesbank says it’s buying gold, Katy bar the door.”

The gold and silver market being flooded with paper shorts is yet another sign that time is short. Kirby says the elite want people to think gold and silver are bad investments, but he says don’t believe it, and “do not sell it.” Kirby goes on to say, “Gold and silver are historically alternatives to a failing fiat currency regime. The U.S. dollar is failing in front of our eyes. We know that because we know that $21 trillion extra (on top of the $23 trillion national debt) was created, and we know what they are doing with it. Part of that $21 trillion is being used to knock the price of gold and silver down with paper contracts. This is not a winning strategy, and this will ultimately blow up in their face too. They are being done to buy time and make the dollar appear strong. . . . The way this has to end is the U.S. dollar will go to its real intrinsic value, which is zero. That implies a hyperinflationary experience at some point in time, and it could be soon. . . . The amount of money being fed into the system is soon going to be too hard to hide.”

Kirby says this is the real reason why the Deep State wants to get rid of President Donald Trump. Kirby explains, “The reason they want him out is President Trump is not owned by anyone. Because he is not owned by anyone, I believe they all live in fear that when the system blows up, Trump will point fingers at people and lay blame where it should be laid. That’s what they are afraid of. They don’t want Trump singling them out, the people that are guilty. . . . They don’t want an honest guy who is going to name names. They don’t want him in control because he’s not controllable.”

(To Donate to USAWatchdog.com Click Here.) (Update: YouTube finally did not monetize this video.  This time only after about 5,000 views.   Enjoy!)

There is some free information on KirbyAnalytics.com. If you want more cutting edge original macro-economic analysis, you can become a subscriber by clicking here.