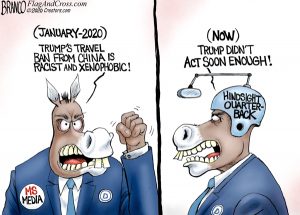 President Trump is pushing for millions of people to take Hydroxychloroquine, while Bill Gates is pushing for a global vaccine to cure the Wuhan China virus. One is about “America First,” and the other is for a new world order control system of people globally. One is a good guy and man of the people, and the other is an evil globalist who wants to control and depopulate the world. Can you tell who is who?

It’s official. The Fed has gone absolutely wild, and it looks like it’s going to lend money to anyone and everyone and buy every toxic asset on the planet. This would be a funny and outrageous line if not totally true. Oh, and the Fed is not worried about inflation and says there is “no limit to what it can do.” Inflation here we come.

AG William Barr showed a glimmer of hope that the coup plotters who tried to remove President Trump will someday be prosecuted. Barr told FOX News that there was “a whole pattern of events to sabotage the Presidency.” Is that the talk of a prosecutor that does not intend to prosecute?  We will see.

(To Donate to USAWatchdog.com Click Here)  Up Date: This video was finally monetized.