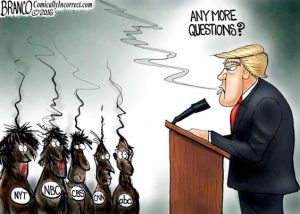 The mainstream media (MSM) are being exposed for the propaganda press it is. Trump has new guidelines to enforce immigration laws and deport people who are illegally here, and yet the MSM calls them “undocumented” or simply “immigrants.”  The MSM will not use the term “illegal immigrant” or “illegal alien” because it destroys the false narrative and would reinforce the idea that people break the law to come to America.  Democrats and their lap dog propaganda press want illegals from foreign countries to undermine the legitimate citizens and their wants and needs.

Poll after poll shows most Americans want immigration laws enforced. They certainly favor criminal aliens to be deported.  The latest poll shows a whopping 80% of Americans do not support so-called Sanctuary Cities where illegal aliens can hide from deportation.  Why isn’t this new poll shown all across the MSM spectrum?  Because they are what Donald trump calls “Fake News.”  Not showing the overwhelming negativity by America on illegal immigration is a lie by omission by the very fake mainstream media.

Former Fed Head Alan Greenspan says “we need a gold standard” more than ever. Greenspan also says that we would not be in such enormous and historic debt if the U.S. had a gold standard.  He also says inflation is coming, and that will “ultimately increase the price of gold.”  Multi-billion dollar money managers such as Jeff Gundlach and Kyle Bass are saying the same things and putting their money where their mouths are and buying gold.

The guest for the “Early Sunday Release” is former White House Budget Director in the Reagan Administration, David Stockman. Stockman says what’s coming in the financial markets is nothing short of a “bloodbath.”