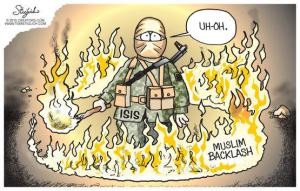 Everybody has seen the horrifying video of the Jordanian pilot being burned alive by the Islamic State.  I want to concentrate on why these Islamic radicals did this, and did it in a slickly produced video.  I think these terrorists wanted to make sure the world could clearly see and hear this horrible act to get people riled up for war.  Remember the stories about how the Islamic State was negotiating a release of the pilot when, in fact, he was already dead?  The Islamic State wanted to take it up a notch and build up interest, but why?  I think they want to invite war and, this time, from Jordan.  Why else would they burn someone alive in a cage and make a video of it to release to the world.  The videos of beheadings were not getting them enough attention and outrage.  I think that is exactly what they got as Jordan ramped up its airstrikes against the Islamic State.   Jordan is a small country with lots of refugees.  Many Muslims are outraged about the burning pilot but there are some closet sympathizers to ISIS.  Is this going to be used to destabilize Jordan?  Get Jordan over extended and topple the government?  Will Obama give King Abdullah of Jordan the weapons and help he just came to Washington to ask for?  What is the President saying about this?  When he was trying to make the point that Islam has been hijacked, the President said, “Remember that during the Crusades and Inquisition, people committed terrible deeds in the name of Christ.”  One thing is for sure; War in the Middle East is increasing and not decreasing.

In a few weeks, the Prime Minister of Israel, Benjamin Netanyahu, will speak to Congress.  President Obama is reportedly angry, but keep in mind, Congress is a co-equal branch of government.  It can do what it wants without permission from the President.  Forget about talk about the so-called “breaking of protocol.”  That pales in comparison of giving 5 million illegals benefits and citizenship that the President himself said many times he could not do.   The President is angry about Netanyahu because he will, no doubt, say what a terrible deal the Obama Administration is cutting with Iran.  Iranian officials have reportedly said the U.S. is “begging us” to cut a deal.  Netanyahu will be laying out the case for a tough deal and more sanctions, at the very least.  This will put more pressure on President Obama, and some of the pressure will come from Democrats.  Minority Leader Nancy Pelosi hinted at the possibility of some Democrats being “too busy” (which is code for boycott) to come to the Prime Minister’s Congressional address.  I think many Democrats will attend.  If they don’t, that is going to backfire with voters in 2016.  Again, there are increased tensions, not decreased tensions, in the Middle East.

In Ukraine, the leaders of France and Germany, Holland and Merkel, are frantically flying to Kiev and Moscow to try to negotiate a new peace plan.  This is coming at a time when the EU just agreed to new sanctions against Russia and when NATO continues to add military equipment and manpower to Eastern Europe.  This sounds like a last ditch effort to avoid a much wider war.

Meanwhile, the EU could not be on any shakier financial footing.  The EU is in the process of cutting off any more bailout help for Greece, as that country is demanding debt forgiveness.  If it were just Greece, this would be a containable problem, but there is Italy, Spain, Ireland and Portugal, and all of them are going to want the same debt cut deal.  This is why Greece is so important.  When Greece finally and officially defaults or gets its debt cut, it is over.   The real problems are not just the broke countries, but the big banks in Europe are also in deep financial trouble.  S&P cut the rating of many big banks in the Eurozone.  This is why bank runs are already happening in Greece, and when they get into full force in Europe, the U.S. will not be far behind.

Finally, I want to talk about the sinking U.S. economy.  I do not want to beat you over the head with the exploding trade deficit or the fact that the creation of full-time jobs is at historic lows.  I just want to highlight the fact that RadioShack filed for bankruptcy.  The company has a little less than $200 million more in debt than assets.  The company is trying to hang on, and they might cut a deal to turn things around, but it is not a sign of a healthy economy when a business with nearly 5,000 stores in 25 countries files for bankruptcy protection.  RadioShack is a 94 year old company that survived the Great Depression.  It looks like it will not survive the so-called “Great recession.”