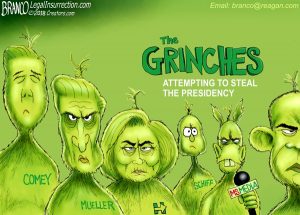 The stock market has made wild swings this week.  Gregory Mannarino from TradersChoice.net comes on to make sense of it all.  Mannarino gives his analysis on stocks, bonds, interest rates, gold and silver.  Is the market setting up to go higher or fall on its head?  Mannarino breaks it all down.

The biggest story of the week barely got any coverage from the mainstream media (MSM) because the MSM did not like the outcome of the Muller investigation.  Mueller personally signed off on giving General Michael Flynn zero prison time and basically said there was no collusion between the Trump team and the Russians.

The funeral of President George H. W. Bush (41) took up a lot of coverage this week and postponed Congressional testimony from fired FBI Director James Comey, Obama Attorney General Loretta Lynch and DOJ Prosecutor John Huber, who is looking into the FBI’s handling of investigations of Trump and Clinton in the 2016 election.  This was a failed coup against President Trump, and it will all come sooner rather than later.

Michael Pento of Pento Portfolio Strategies will be the guest for the Early Sunday Release.
Pento is an expert on the financial markets, and he tells us why he sees big financial trouble coming our way.