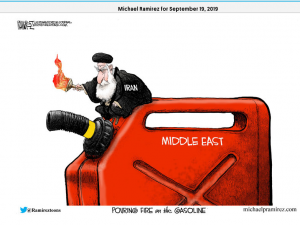 Is America going to have a conflict with Iran? It looks like it is not. Trump is going to increase the already stiff tariffs on that Persian Gulf nation. One sure sign that is true is former National Security Advisor John Bolton is reportedly upset the U.S. will not be bombing Iran over the drone attack on Saudi Arabia oil installations.

Will the Russian collusion hoaxsters, such as James Comey and Andrew McCabe, ever be prosecuted in the seditious acts they committed on President Trump? More reports are coming out from DOJ Inspector General Michael Horowitz that are making it increasingly hard to ignore the malfeasance of many top government officials in making up a totally fake story to try to remove President Trump from office. It did not work.

Is the economy doing great or is it teetering on the edge of big trouble? If you listen to the Fed this week, it looks like trouble is coming.

Join Greg Hunter of USAWatchdog.com as he talks about the top stories of the week in the Weekly News Wrap-Up.

(To Donate to USAWatchdog.com Click Here) Up Date:  You Tube is now allowing commercials to run (short profitable versions).  I only lost nearly 40,000 views with little to zero commercials that I will not get back.  Thank you You Tube for taking my $$$ away for nothing.

Gold expert and CEO of Bullion Management Group (BMG) Nick Barisheff will be the guest for the Early Sunday Release.