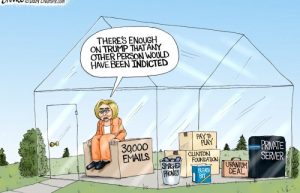 Rudy Giuliani says the Clintons “are America’s top crime family.” He said this shocking statement in response to Hillary Clinton saying that Trump would have been indicted if he were not President. This shocking statement was largely ignored by the mainstream media (MSM), but make no mistake, it was no accidental slip by one of President Trump’s top legal advisors. I think team Trump is putting the public on notice there are going to be bigtime arrests made in the D.C swamp, and those will include the Clintons.

Joe Biden has officially thrown his hat into the ring to run for President of the United States. Trump already has branded the former Vice President as “Sleepy Joe” as he welcomed him to the 2020 competition. Biden also made the unusual move to say he told his former boss president Obama NOT to endorse him. Is Biden trying to stay clear of upcoming legal troubles coming to his former running mate?

The economy seems to be running fine, but under the surface, what is it running on. Some say massive amounts of debt is propping a house of cards.

Former CIA Officer and whistleblower Kevin Shipp will be the guest for the Early Sunday Release.