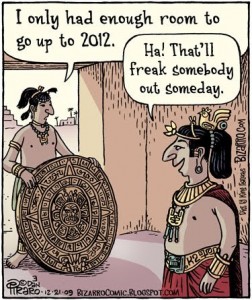 Today marks the official one year countdown to the end of the Mayan calendar.  365 days from today will be December 21, 2012.  Some say it marks the end of the world, but others say it is really the end of an era.  An Associated Press (AP) report, yesterday, about Mexican tourism said, “It’s selling the date, the Winter Solstice in the coming year, as a time of renewal. Many archeologists argue that the 2012 reference on a 1,300-year-old stone tablet only marks the end of a cycle in the Mayan calendar.  “The world will not end. It is an era,” said Yeanet Zaldo, a tourism spokeswoman for the Caribbean state of Quintana Roo, home to Cancun. “For us, it is a message of hope.” (Click here for the complete AP story.)

I don’t know exactly what’s going to happen in 2012, but I am betting a dramatic change is coming.  For most, life will be much harder and people will be much poorer.  You’ve heard of peak oil?  Well, peak credit is also topping out, and it looks like everything will hit the fan next year.  Charles Hugh Smith has a similar 2012 economic outlook, and wrote an in-depth post yesterday where the title describes the entire story: “2011: The Last (Debt-Consumerist) Christmas In America.”  Mr. Smith said, “A funny thing happens when you depend on expanding debt to fund your consumption: eventually the cost of servicing your rising debt reaches the limit of your income, and you can’t borrow any more, unless interest rates decline so you can leverage your income into higher debt. . . .Lowering interest rates extends the era of debt-based consumption, but it only puts off the inevitable crash when the ability to borrow runs out. Eventually the cost of servicing this lower-interest debt absorbs all your disposable income, and the borrowing skids to an abrupt stop.”  (Click here to read the most excellent post from Charles Hugh Smith.)

Of course, when the borrowing stops, the money printing will begin.  I think we are somewhere between borrowing and money printing with the emphasis on the printing part.  $12 trillion are held outside the U.S. in liquid dollar assets.  In the end, the world will face a currency crisis as dollar holders rush to cash out of an increasingly debased buck.  Is 2012 the year?  We will see.

On the European front, the problem there is getting worse, not better.   Yesterday, the head of the International Monetary Fund (IMF), Christine Lagarde, said, “Currently the world economy stands at a very dangerous juncture.”  Former chief of the IMF, Dominique Strauss-Kahn (DSK), was just as downbeat on the solvency crisis facing the EU.  Renowned market expert, Yra Harris reported on his site yesterday, “DSK was adamant that the EUROPEAN CRISIS was a three-pronged problem: A DEBT CRISIS; A GROWTH CRISIS; and A LEADERSHIP CRISIS. The CRISIS IN EUROPE is further aggravated by the fact that the European leaders seem that time is not of the essence where DSK believes time is not a friend of the Eurocrats. It is of the utmost importance that the CRISIS be dealt with now and not later. Nothing like a dishonored and wounded leader to finally speak the truth.”  (Click her for more from Mr. Harris.)

In a different interview this week, with Business Insider, DSK had more dire quotes, “…Strauss-Kahn said the firewall to staunch the spread of the crisis “doesn’t really exist”. The €500bn  European Stability Mechanism would only be operational in months when “the question is a question of weeks. The question is not a question of months.”  (Click her for the complete BI story.)  Does the European solvency crisis suck the whole world into an abyss in 2012?  The timing sure could fit nicely with the Mayan 2012 prediction.

Finally, I got an insightful question and comment from a reader named Nathan a few days ago.  He asked, “Hey Greg, you’ve reported news or have been part of the media for a majority of your life. Have you ever seen any year compared to 2011 in your career? The Arab spring, European riots, Historical flooding, droughts, wildfires, tornados, heat waves. Congressional approval of 9%.  The European debt crises.  Nuclear meltdowns and tsunamis.  13 Deadly Earthquakes.  The rise of the East and slow death of the west, 1700 cities protesting the 1% ….etc, etc, etc ? Just wondering? Thanks Nate ….This year’s been like a walk through the Book of Revelations that leads to the doorway of Mayan prophecy.”

Nate just left out one big wild card that will continue to be played out in 2012, and that is war in the Middle East.  This conflict could go nuclear, and if that happens, a currency crisis will be the least of our worries.   No, I have never seen a year quite like 2011.  If 2012 lives up to just half of the hype it’s getting, we are definitely in for great change.