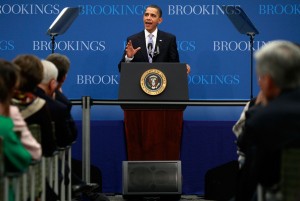 President Obama’s “Jobs” speech this week hinted, once again, that he is well aware the U.S. Government has a ballooning deficit problem.  In remarks made to the Brookings Institute, the President said, “There are those who claim we have to choose between paying down our deficits on the one hand, and investing in job creation and economic growth on the other. But this is a false choice. Ensuring that economic growth and job creation are strong and sustained is critical to ensuring that we are increasing revenues and decreasing spending on things like unemployment so that our deficits will start coming down. At the same time, instilling confidence in our commitment to being fiscally prudent gives the private sector the confidence to make long-term investments in our people and on our shores.”  In other words, the President is going to spend money to get people working and paying taxes again.

The President, again, mentioned the nation’s deficit in his “Afghan troop buildup” speech last week, saying, “…Our new approach in Afghanistan is likely to cost us roughly $30 billion for the military this year, and I’ll work closely with Congress to address these costs as we work to bring down our deficit…”

It was reported recently the TARP program will use $200 billion less than was needed to stabilize the financial system back in 2008.  Some of this money will go to help give incentives to small business to create jobs.  Other parts of leftover TARP will go to pay down the deficit.

Am I missing something here?  Didn’t Congress appropriate TARP money out of thin air?  Isn’t the Obama administration asking Congress to raise the nation’s debt ceiling?  (The Hill 9/7/09)   And don’t we have to raise the debt ceiling to avoid default as Congress has 8 times since 2001? (The Hill 11/10/09)  Isn’t the Health Care Bill going to cost at least a $1 trillion over the next 10 years?  So, we are going to fight two wars, create jobs, fund a new health care system and pay down debt with printed money?

Speaking of money, the FDIC just closed down another 6 failed banks over the weekend.  This is something the government has been doing almost every Friday since the first of the year.  Before this round of bank closings, the insurance fund was $8 billion in the red.  Now, the FDIC is even further in negative territory.  I have an idea!  How about taking the leftover TARP money that some have described as a “windfall” and replenish the FDIC?  The banks are another huge problem that will require hundreds of billions of dollars to protect depositors.  There is no end in sight for weekly bank closings, a phenomenon I call “Red Friday.”

We have some extreme debt problems facing the country.  Just this week, Moody’s (a bond rating company) issued a report that questions the USA’s AAA credit rating unless it “can whittle down…ballooning deficits.” (more from WJS)  President Obama is acutely aware we have debt problems.  That is why he keeps mentioning “bringing down our deficit” and “being fiscally prudent.”

So, when is the President going to reduce the deficit?  The answer is simple.  President Obama is not going to reduce the deficit, at least not before the 2010 mid-term elections.  I predict he will not reduce spending before the 2012 presidential election either.  It’s not because the President is a bad guy, but because he is a politician and politicians do what needs to be done to win elections.  So, expect more money printing and bigger deficits at least until after 2012.