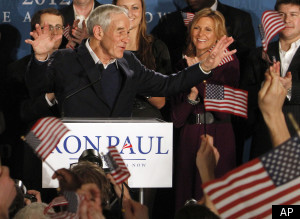 In a new poll, out yesterday, 7 out of 10 Republicans and right leaning independent voters believe Mitt Romney will be the GOP nominee for President.  (Click here for that poll.)   Does that mean it’s over for Congressman Ron Paul?  I think it is safe to say it is probably a long shot he will be the Republican nominee, but what about a third party run?  Can Ron Paul win as a third party candidate?  I say that is much less of a long shot, and here’s why.

Let me first say, Dr. Paul has repeatedly said that he has no interest in running as a third party candidate.    I do not know (or have talked to) anyone in his campaign.  This is my objective analysis and nothing more.  Ron Paul as a third party candidate would be much different than the third party candidates of the past.  Conservative presidential candidate Ross Perot of the 1992 and 1996 elections predominantly took votes away from the Republican candidates.  In 1992, national exit polls had Perot splitting the Republican and Democrat vote equally, but it was not split equally in every state.  (Click here for more on this.)  A president is voted in by winning each state’s Electoral College votes.  It’s a winner take all game, so every state gives a certain number to the winner of each state.   Also, Perot spent millions hammering Bush in the 1992 primaries; so, Perot mostly had a negative effect on the Republicans.  The ultra-liberal Ralph Nader’s third party campaign in 2000 took votes away from Al Gore, the Democrat.  More than 97,000 voted for Nader in Florida alone.  Gore would have easily won the election and Florida if Nader would have not run.

Then there is Ron Paul.  He would, no doubt, run on a Libertarian type ticket.  Paul would take votes from Republicans that think Romney is not conservative enough.  After all, he has, so far, come in second in the caucuses and primaries, but that is just with the GOP.  He would take a large percentage of the 40% of people who call themselves “Independent” voters.  Paul also does well with young voters.  In Iowa and New Hampshire, nearly half of all GOP voters under 30 voted for Dr. Paul.  He would probably do well with Democrats in the same group.  He may be booed in South Carolina by the old guard for his anti-war policies, but the young, who would have to fight the wars, think his message is on target.

As far as liberal Democrats go, Paul would carve a significant amount out of President Obama’s base.  Some of the most stinging criticism of the President has come from his own party.  You can’t get much more left leaning than the ACLU, and that organization said the most recent signing of the “Indefinite Detention” bill by the President basically guts the Bill of Rights.  The ACLU says, “The bill contains dangerous, sweeping worldwide indefinite detention provisions.”  The ACLU has vowed to fight this unconstitutional legislation all the way to the Supreme Court.  Even MSNBC’s Rachael Maddow, a self-proclaimed liberal, criticized the President on this issue.  (Click here and hear her nearly 8 minute rant from early December 2011.)   The President also said on 60 Minutes, “. . . some of the least ethical behavior on Wall Street, wasn’t illegal.”  This statement is absurd because the meltdown of 2008 is 70 times worse than the S&L crisis 20 years ago when 1,000 financial elites were convicted of crimes.  Zero criminal prosecutions of financial elites happened in the wake of the 2008 meltdown.  I think it is safe to say Ron Paul would take some very disgruntled Democrats away from Obama.

On the other hand, GOP candidate Romney would get very few votes from Democrats because, after all, there is little difference between him and Obama on this issue.  Romney thinks “corporations are people.” Romney and the GOP would like you to think the 2008 meltdown is “all the government’s fault” for making the poor defenseless banks loan money to poor people who couldn’t pay it back.  That is a crock!  Don’t take my word for it.  Listen to William Black, former bank regulator and professor of both law and economics, on how zero financial elites have been prosecuted for crime. (Click here for one of many stories.)  Remember, this is what Occupy Wall Street is all about.  Obama and Romney will get very few votes from these folks.

So, Congressman Paul could do something that no other third party candidate has done in recent history– take votes from left, right and center.  This is why both Democrats and Republicans fear and loath him.  I have noted several Ron Paul snubs on both the left and the right, but Democrats seem especially terrified.  Can you imagine Obama debating Dr. Paul on civil liberties, true Wall Street reform, budget deficits or war?  After the New Hampshire primary, liberal commentator Lawrence O’Donnell said John Huntsman was the “real second” when, in fact, Ron Paul was by a significant margin.  “Daily Show” comedian Jon Stewart rants about this stupid and biased comment.  Please watch, it’s funny.

Huntsman was doing so well he dropped out of the race before the next primary in South Carolina.  Dana Bash, also, showed her true biased feelings on CNN in early January when she said she was “worried . . . Ron Paul will continue on long into the spring and summer.”  (Click here to hear the comments of CNN reporter Dana Bash for yourself.)  So, why would Congressman Paul “continue on long into the spring and summer” even if he would likely not win the GOP nomination?  Do you know of any third party primaries out there?   Of course not.  Paul would keep campaigning just to get press and gain votes.  Dr. Paul would love to narrow the field down to just Romney, and he has the money and campaign organization to do it.  When it’s mathematically impossible for Paul to get the GOP nomination, I expect a third party run.  At 76, I can’t imagine this man of conviction to just pull up stakes and leave the presidential race to the two corporate candidates put forth by the Democrats and Republicans.