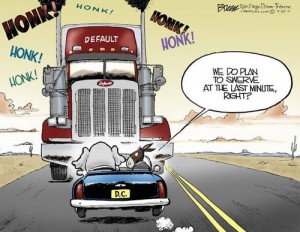 Everybody is thinking the debt ceiling deal is a done deal.  To that I say, not so fast.  First of all, this is a deal everybody hates including the President.  That doesn’t mean he won’t sign the legislation when it comes across his desk—he will.  The leaders in Congress have agreed to a plan, but the trick is going to be getting it through the House and Senate.  The far left hates it for the spending cuts and no upfront tax increases.  The far right hates it because the cuts are not deep enough.  There is less resistance to the deal in the Senate, but the House of Representatives is another story altogether.   There are probably at least 160 “NO” votes between Democrats and Republicans.  (The Senate is not a done deal either, but it is probably more likely to pass it than the House.)  The Black Caucus hates the debt deal so much it has asked the President to bypass Congress and raise the ceiling on his own by using the 14th Amendment.  That is not going to happen before the August 2nd deadline.  If the bill fails to get the votes, who knows what will happen.

There are some big sticking points.  The debt bill is supposed to be a two stage plan.  Basically, the first stage of the deal promises immediate cuts of a little less than a $1 trillion now along with raising the debt limit by around $2.4 trillion in total.  (The debt limit is also raised in 2 stages.)  This puts the debt limit high enough to make it past the 2012 election.  In the second stage of the deal, there is $1.4 trillion in more cuts.  According to the President, tax increases will also be on the table.  This will have to be done no later than December 2011.  The deficit reduction is supposed to be decided by a Special Congressional Committee.  Otherwise, big automatic cuts will kick in (they call this the trigger). This includes military spending and Medicare.  So, that alone is a big sticking point and has some in Congress shying away from this deal already.  Tax increases in stage two of the deal is also another big problem that could derail passage, especially in the House of Representatives.

Yesterday, David Plouffe, Senior WH Advisor, was on “Meet The Press” and was insisting the second stage should be “balanced,” which means tax increases (confiscation).  So, if this plan does win approval, Congress will be right back to chasing its tail in a spending and tax debate in the not too distant future.   $2.4 trillion in cuts may sound like a lot, but not when you consider the cuts happen over ten years.  That’s just $240 billion a year, and that hardly dents annual deficits of $1.5 trillion ($1,500 billion.)  This bill does not really cut spending, but merely slows it down.  Senator Lindsey Graham said today on ABC’s “This Week,” “. . . we’re no longer running toward oblivion. We’re walking toward it, and now we need to stop and turn around, go back the other way.  What do I tell people at home who say, what did you do about getting us out of debt?  I slowed down how much debt you add?  Instead of adding $10 trillion, we’re going to add $7 trillion

Congressman Ron Paul said last week, “I think both sides are failing to understand the country is bankrupt.  There will be a default.  The only debate that is going on is how you default, and I vote for stopping the spending so we don’t have to print all the money.”  (Click here to see the complete Ron Paul interview.)  Of course, what he is talking about is the destruction of the buying power of the dollar, or inflation.  I am sure everyone has noticed big increases in food and energy in the last year or so.  That problem will only get worse as the deficits increase.  Even if a bill that lifts the debt ceiling does garner the President’s signature, America’s credit rating may be downgraded for not cutting enough spending.   The rating agencies were looking for a minimum of $4 trillion, and this deal provides a little more than half of that amount.  You know what happens when you have a low credit score don’t you?  You pay higher interest rates.  That would increase borrowing costs for the government and everybody else in the U.S.

I am still not sure the deal cut between the President and Congressional leaders of both parties will have enough votes to pass the legislation before August 2nd.  I look for real resistance in the House from both Republicans and Democrats.  Boehner and Pelosi will have a tough job getting the votes from their own parties to pass the most hated legislation to hit Washington D.C. in a very long time.  I am still betting Congress will miss the August 2nd so-called default deadline.