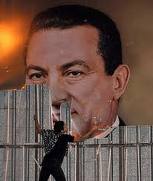 I was watching Egyptian news coverage of the protests on NBC last night, and I was amazed by the spin the Peacock Network took.  It was being reported as something positive–as if the mass release of prisoners by angry mobs (a few days ago) was a good thing.

They didn’t bring that up while I was watching the 2011 Egyptian protests, but correspondent Richard Engel did a stand-up in a crowd that felt more like Mardi Gras than revolution.  Here’s more of NBC’s coverage on the web, “In Washington, President Barack Obama said he spoke with Mubarak after the speech, and the Egyptian leader “recognizes that the status quo is not sustainable and a change must take place.”

“What is clear and what I indicated tonight to President Mubarak is my belief that an orderly transition must be meaningful, it must be peaceful and it must begin now,” Obama said. (Click here to see the complete story from NBC.)

A “peaceful” transition to what?  It looks like the President has decided to throw a 30-year ally under the bus of political correctness.  The Israelis are calling this a “betrayal.” Here’s some of what Reuters had yesterday, “One comment by Aviad Pohoryles in the daily Maariv was entitled “A Bullet in the Back from Uncle Sam.” It accused Obama and his Secretary of State Hillary Clinton of pursuing a naive, smug, and insular diplomacy heedless of the risks.” (Click here for the compete Reuters story.)

One writer, who has a handle on what is going on in Egypt and what it may mean to the world, is James Howard Kunstler.   Mr. Kunstler specializes in forecasting the future as he has done in some of his novels.  His latest post (The Earth Shifts) is a must read for anyone who thinks this “peaceful” transition is going to turn out to be sunshine and rainbows.  –Greg Hunter–  Before you read the rest of the post, please check out this video from last week on the Egyptian protests by (clicking here.)

Those Panglossians around the USA awaiting something like an election in Egypt are going to be disappointed. What’s going on in the streets of Cairo right now is an Egyptian election – minus the American-style trappings of corporate grift, scripted “debates,” and polling places that make our elections so satisfying.Many here in the dreamland of Happy Motoring and Cheez Wiz are asking themselves why President Obama is waffling about the obvious tides of “change” now lapping over the ancient Kingdom on the Nile. How can he not believe in it? Why isn’t  Mr. O out there in front with a bloody bandage around his head, cheerleading for the street fighters? If you lay aside the subtleties, the answer is simple: nothing beyond the status quo of recent years is good news for America.

For one thing, only people paid to flap their gums on Larry Kudlow’s nightly CNBC show, and children under nine years old, believe that anything like “democracy and freedom” will arise out of a street revolt in this region of the world. Sure, the opening acts of an historic event like this bring on mass intoxication that the Shining City or the Kingdom of Heaven or some other ideal disposition of things is at hand. There may even be an intermezzo of civil factional interplay, as we saw in Iran thirty years ago, with figures like Shapour Bakhtiar, Mehdi Bazargan, and  Abolhassan Banisadr revolving through the turnstile of politics. It doesn’t take long for the turnstile to turn into a meat grinder, and it doesn’t take much vision to see all the things that can go wrong when that happens in that part of the world.

Before I go any further, I don’t want to be misunderstood by eager misunderstanders.  In my view, President Mubarak has about as much chance of sticking around his presidential palace another fortnight as a bluebottle fly has of conducting the next Easter mass at the Vatican. Mubarak’s resistance to that message prompts one to wonder: what is it with these old despots that they can’t manage some sort of orderly timely transition – even if they handpick the successor dude.? There must be a few capable younger replacement despots in a country that large (around 80 million). Why does it always have to come to this?For the answer to that abiding mystery I can only commend you to the works of Gabriel García Márquez.  Who else really knows what winds of confusion blow through the minds of old men in realms of power? But, on the “plus side,” as they say in American positive thinking circles, the old bastard did manage to keep the peace for three decades at his end of things in the world’s premier political hot-spot. This is truly one of the unsung miracles of the age we’re living in. Of course, with Mubarak pulled down, all bets on this would be off.

At the moment, Nobel Peace Prize winner Mohamed ElBaradei, former head of the International Atomic Energy Agency, a seemingly rational, capable fellow of unquestioned gravitas is angling to replace Mubarak. By declaring his intentions, ElBaradei has already crossed some kind of line in the sand that, under less fateful circumstances, would get his ass tossed in a crocodile pit faster than you could recite an incantation from the Scroll of Thoth. But these are extraordinary moments.

More troubling is ElBaradei’s flirtation with the Muslim Brotherhood, a venerable mostly underground opposition with a not altogether trustworthy agenda where the USA, and the OECD West generally, are concerned. Whatever the MB represents – and I don’t think even the Arab Desk nerds at the State Department are even quite sure – there’s a fair chance that it includes mischief like promoting a Sharia state, inciting trouble through Hamas, supporting uprisings in other key Muslim nations, and egging on new, unwelcome disorders in a region that the stability of the world hinges on these days.

The key to all that is oil, of course, and mainly the oil of Saudi Arabia. King Abdullah there is at least 86 years old and in poor health.  Crown Prince Sultan, his successor, isn’t much younger. If ever a country was ripe for a political flipping it is this shaky kingdom. Everyone from the White House to Foggy Bottom to Langley, Virginia, is probably messing his/her pants this week wondering how much longer the lid can be kept on that joint.

To return to an earlier theme, what should amaze us now in the unraveling of this region is how remarkable and long the recent era of stability lasted. Meaning, most of all, how reliable those tanker shipments of oil have been moving through the Straits of Hormuz and the Suez Canal to their destinations in the lands of the Crusaders (and their younger kin in the New World). To put it pretty starkly, the so-called developed world can’t keep its act together more than a week without that steady mainline of Arabian oil, even though it doesn’t represent most of the oil traded in the world. The margins are too thin. There’s no wiggle room, really, especially for us, in our kingdom of freeways. We lose ten percent of our oil supply and that’s all she wrote for business as usual around here. I’ll put it even more starkly: we can’t afford to let this shit get out of hand for a New York minute.

But it’s not really up to us, no matter how many times Hillary Clinton says “uh,” through her tightly pursed lips. And Barack Obama is kicking back like everybody else watching things beyond our control spin out on cable TV. Remember something else: these uproars in the Middle East are only the first stirrings of political reaction to a scarcity of key world resources, especially grain crops, which have never been in such short supply in modern times. And the part of this problem that isn’t due to sheer population overshoot is almost certainly a result of climate change – which many idiots in the US congress refuse to acknowledge out of sheer obdurate stupidity.

A word or two about last week’s State of the Union speech. The platitudes were nearly too painful to bear: techno-magic and a zillion engineering PhDs will keeps us at the zenith of historic wonderfulness. Has anyone been to Youngstown, Ohio, recently? We’re so full of shit about ourselves, our true condition, and our prospects, that you can see it through our eyeballs. I did, however, mutter a prayer of thanks that Mr. Obama did not act out the mortifying ritual (first established by R. Reagan) of introducing the various role models, heroes, and exemplars installed up in the gallery. We have enough award shows in this country, and it’s the horror-inducing season for it – just as the world is flying apart at the seams.